Forget the Siege, deal with the aliens.

Yesterday’s Ubisoft Forward was a pretty fun one, with a few surprises here and there and promises of continuation of some of their best franchises. That includes Rainbow Six Siege, which will see cross-play sometime in 2022.
But for those seeking something different – or just tired of the plain old approach of Siege, there’s something new coming. On September 16th, Rainbow Six Extraction (previously known as Quarantine before COVID forced a name change) will arrive, and it should introduce our well – known operators to an all new kind of problem – aliens.

The trailer above gives you a good idea of what’s in store, as the Rainbow Six team has to plan their tactics around different types of aliens, including powerhouses like the Apex, who require a great deal of ammunition to bring down. Teams of three will work together to try and stop them, using whatever weapons and tools they can get their hands on.
The game will introduce a number of familiar operators from the franchise, including Hibana, Ash and Ela, along with newcomers and other veterans, so players will have various skill sets – and tons of firepower – to choose from.
Like Siege, everything will be objective-based, though the aliens will put up an interesting fight that’ll change things drastically. That includes having to deal with some goop that could slow down your agents, something that poses a problem when the aliens are bearing down on you. 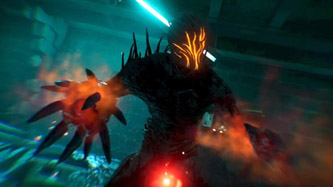 Fortunately, you can work together alongside your squad to assure you stay in one piece – or try to, anyway.
Unlike Siege, Extraction is set to have cross-play on day one, and that’s across all platforms, including last-gen and current-gen. How it’ll perform has yet to be seen, but plans are in place for a beta sometime later this summer, though details aren’t available just yet. We’ll find out more soon.
Extraction arrives on September 16th for Xbox One, Xbox Series S/X, PlayStation 4, PlayStation 5 and PC. It looks to be one hell of a game, and a nice change of pace from the usual Siege standard. Besides, how often do you get to headshot an alien with a finely tuned operator? Yeah, like never.
Check out the gameplay below and dig in!