Marvel and Square Enix are at it again.

Square Enix began its showcase today with a bang, thanks to a new title that will continue its partnership with Marvel Games in the most fruitful way possible – with Groot! Guardians of the Galaxy is in the works over at Eidos Montreal, and is set for release on PlayStation consoles, Xbox consoles and PC on October 26th. That’s right, on top of the expansions that Marvel’s Avengers will be getting. 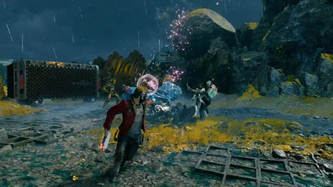 Though the game has the attitude of the films of the same name, it features a whole new cast, as well as characters from the comic books, thanks to a story put together by comic book writer
Dan Abnett. It features a playable Star-Lord, who can take command of his team to lend a hand as he takes on different adversaries. It definitely looks like a lot of fun, and will focus more on the single player experience, compared to the multiplayer that Disney’s Avengers has.
You can check out the debut trailer below, and prepare to, ahem, be hooked on a feeling. We’ll have gameplay available later on as well, so you can see this amazing game in action.
We wonder what Chris Pratt thinks. Hmmmm.