Hop on your bike and ride!

Last year, Ubisoft announced Riders Republic, a spin-off of sorts to its open-world snowboarding/extreme sports game Steep. But instead of focusing on the slopes, this one also gives you the opportunity to ride a dirt bike, hop in a wingsuit and more. And thanks to Ubisoft Connect, we have a good idea of just when we’ll be able to hit the track. 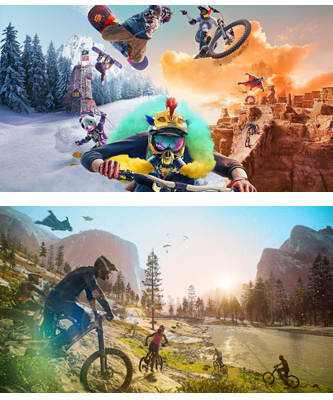 The trailer, featured below, showcases what kind of activities you’ll be able to partake in.
Whether it’s circuit based races, arena competitions, or online events where everyone can race starting at once, there’s a whole lot to do. And there’s snowboarding, dirt biking, wing suiting and so much more. You’ll literally progress your rider in ways you can’t even imagine.
The developers at Ubisoft Annecy have a lot of open-world stuff planned here, and you can either invite your friends or take it on solo, just to see how well you do.
It’s totally up to you, as you attract more sponsors and become an athlete to be contended with.
The game arrives on September 2nd for Xbox One, Xbox Series S/X, PlayStation 4, PlayStation 5, PC and Stadia.
Check out the trailer below and get ready to RIDE!