Prepare for the Sparks of Hope.

Though Ubisoft Forward’s presentation takes place in just a little while, one of the company’s biggest secrets is already out of the bag – and Nintendo is the culprit! 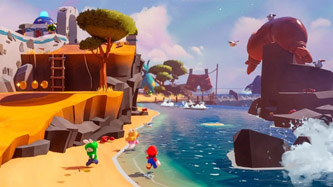 A few years ago, the companies teamed up to create the gem Mario + Rabbids: Kingdom Battle for Nintendo Switch. Now they’re back at it again, as an early listing shows that a sequel, Mario + Rabbids: Sparks of Hope, is coming to the Nintendo Switch in 2022.
Early screenshots for the game (included in this article) indicate a much more detailed world than before, with Mario, some of his older friends and some newfound friends, team up to try and save it.

“Team up with Mario, Luigi, Princess Peach, Rabbid Peach, Rabbid Luigi, and their friends on a galactic journey to defeat a malevolent entity and save your Spark companions,” the game’s listing reads. “Explore planets throughout the galaxy as you uncover mysterious secrets and compelling quests!”

Once again, you’ll make a team from nine different characters, each with their own special skills and abilities to bring to the table. 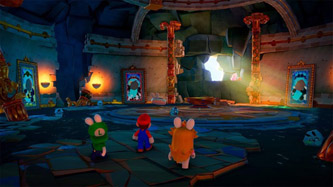 We’ll see the game officially in action later today during the Ubisoft Forward presentation. But this is exciting news for those of you that poured hours into playing Kingdom Battle. The adventure continues! Dibs on Luigi.