Battlefield 2042 Coming To PS5 This October

Back to the future.

A new trailer is set to premiere today for the next chapter in the Battlefield series. However, thanks to a leak from Reddit, we already have a good idea of what’s in store.
The next chapter in the series will be called Battlefield 2042, and set to release for both PlayStation 4 and PlayStation 5 on October 22th. Obviously the PS5 version will have far greater detail, and more likely a much smoother frame rate.
Taking the series out of the past and into a more effective future, the storyline goes a little something like this, according to the leak:
“U.S.A. and Russia stand at the brink of war. Proxy wars have waged for decades, generating experienced but displaced combat veterans. These Specialists use their skills to shape the future — a future worth fighting for.“ 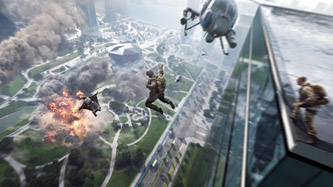 The first screenshots paint a very detailed picture of what players will be up against, including locations like Seoul and Egypt. For good measure, “every map offers a unique experience based on the natural environment“, according to the leak.
The game will feature seven new maps in all, each one supporting up to 128 players – among the biggest count to date for a Battlefield game. And there will likely be crossplay between the PS4 and PS5 versions, though that hasn’t entirely been confirmed just yet.
The game will also introduce a Specialist system, with each one having specific traits, weapons, vehicles and gadgets that work to their advantage. These include the ability to “summon a robotic dog built for battle, employ a grappling hook or don your very own wingsuit“. Yep, it’s huge this time around. 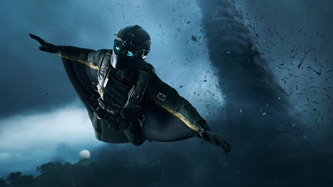 Upon release, the game will have three editions available, including Standard, Gold and Ultimate. EA will likely break these down with the trailer once it debuts later today. There will also be a Year 1 Pass with additional Battle Passes, and it appears that a beta is in the works as well, though details aren’t available just yet. Soon, we suppose.
Anyway, check out the first screenshots in this article and be sure to check out the trailer below. But one thing’s for sure – EA is going all out with this Battlefield, and it definitely shows. The first trailer has been officially revealed, with gameplay set to debut on June 13th.