No name has been relevant to gamers this previous generation like Mass Effect. The first game set a standard for storytelling and exploration; its follow-up continued to excel with deeper gameplay mechanics and characters; and the third, despite some controversy with its original ending, wrapped up the Commander Shepard saga perfectly. But if for some reason you missed out on the trilogy – or you just want to experience it again like never before – BioWare and EA have you covered with Mass Effect: Legendary Edition.
Rather than the routine port where you’d have to pay for each game separately, this package features all three original games remastered, along with most of the downloadable content that was offered. It’s not quite a complete package, as it’s missing its multiplayer and some of the downloadable content from the first game. But what’s here is more than enough to make up for it, with the games providing compelling storytelling, thrilling action, and vast improvements that make the journey all the worthwhile. And this is especially true on PS5 and Xbox Series S/X, as the saga has never looked better than it does on these platforms.

The Biggest Improvements Of All
The real surprising aspect of Mass Effect Legendary Edition is revisiting the game that started it all. The original Effect debuted in 2007 on Xbox 360 with a number of flaws, though its story still made it a worthwhile game to own. But with this release, the game has become something more remarkable than ever before. Not only does it look better, but some of the jankiness with the controls has been fixed (particularly with vehicular handling), and there’s fewer weapon restrictions to stand in the way. In short, it feels more like the game it was supposed to be. But all three games have undergone an impressive overhaul in the visual department. It runs smoothly (60 frames per second on next-gen hardware and the likes of Xbox One X/PS4 Pro), and features solid lighting throughout, along with strong animations and good-looking combat. Some of the human models still look a bit iffy, especially when speaking, but overall it’s not that bad a leap up whatsoever. You’ll find yourself hard pressed to go back to the originals after this. 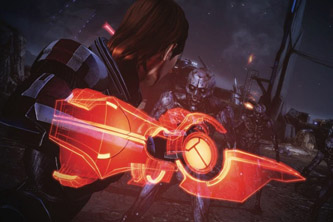 Not only that, but the sound is top-notch, with a soundtrack that still can’t be beat, along with solid voicework (hooray for Keith David, again!) and impressive sound effects. BioWare hasn’t let us down in this department for some time, and the trend is happily continuing onward with Legendary Edition.
Oh, did I also mention the loading times are surprisingly fast? No, really, install it to the PS5 and Xbox Series S/X and see for yourself. (The older hardware’s not bad either.)

Gameplay That Lasts
Where Mass Effect earns its weight in gold is within its gameplay. Every aspect of the combat shines in Legendary Edition, particularly with the first Mass Effect. It literally feels better than ever. And, of course, the sequels are worth a revisit, if only to see what kind of trouble you and your squad can get into with each skirmish. Being able to mix up attacks and make plans to move forward is still a lot of fun.
Not to mention the side activities, including leveling up (which you can do automatically if you please), as well as the, ahem, relationships you can form with others. That’s right, you can still seduce like a bandit here, no matter if you choose FemShep or good ol’ MaleShep (that’s what we call him, right?), and the results are satisfying with each choice you make. Obviously the good/bad scale is saved for later entries in the series, but overall, the scope of how you guide Shepard’s destiny is really cool, even off the battlefield. 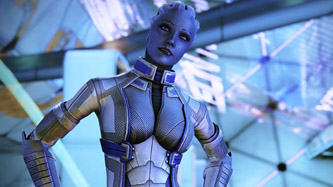 Where the game comes up short is with its multiplayer. There simply isn’t any, as BioWare wanted to focus on the single player aspect of Effect. I mean, that’s fine, as there’s more than 100 hours of gameplay here to keep you coming back, and the choices involved offer significantly replay value. But it wouldn’t hurt for BioWare to offer it in the future, to give players something to do after they’ve saved the galaxy a few times. For now, though, this will more than suffice.

Get To Work, Shepard
The Mass Effect trilogy continues to stand the test of time in terms of game design and storytelling. And now, with Legendary Edition, it’s even bigger and better than ever before. The gameplay is superb, especially with the original game being revamped the way it is; and the visuals and audio truly impress, especially on next-gen hardware. And there’s a lot to do outside of the core games, between the huge stack of DLC to revisit and, well, those lovely seductions.
Now get to work, Shepard, this damn galaxy isn’t going to save itself, and this is one intergalactic mix you shouldn’t miss. 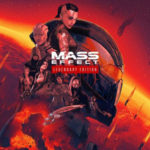