It takes a village.

Over the years, Capcom has experimented with its Resident Evil franchise in many ways. There were high points – Resident Evil 4 among them – but then there were “what the hell is this?” sort of things, such as Resident Evil 6. But the series returned to spooky form a few years ago with the surprising Biohazard: Resident Evil 7, and I’m happy to report that the trend continues with Resident Evil Village.

While the game doesn’t quite innovate when it comes to gameplay – it runs on the general basics that fans have expected, with a good amount of action – it more than makes up for it with a haunting story, awesome gameplay and the kind of ambience that gets the most out of the PlayStation 5 and Xbox Series X systems. (It works fine on previous gen as well.) It doesn’t reinvent the wheel, but it does keep it spinning nicely.

Trouble Afoot
The game catches up with Ethan, fresh from Biohazard, trying to recover from previous events.
He’s resting comfortably with his wife Mia and their newborn child Rose in a nice family home.
But an interesting twist in events leads him to a strange, snowy village, where there’s barely any townsfolk, but a whole lot of werewolves on the prowl. And for good measure, series favorite Chris Redfield also returns, though with questionable motives that leave Ethan wondering what’s up. The life of his child hangs in the balance, and there are plenty of nasties
that are up to no good. We won’t dare spoil the rest of the story though.
One cool thing about Village, however, is how neatly the tale is told. It effectively covers new ground, which fans are sure to enjoy; but it also covers the lore of the series beautifully, especially towards the end when you learn a few things. For good measure, the bosses you’ll go up against are quite impressive, including the mechanically-inclined Heisenberg, whose big plans are revealed in a way you might not expect. Better pack up the ammunition.

Gameplay You’ve Come To Know And Love
As I noted, Resident Evil Village isn’t about reinvention – at least, when it comes to gameplay.
You’ll still spend a good deal of time balancing out items and using weapons whenever you can against the Lycans and other mighty behemoths, in a nice shift towards action following what happened in Biohazard. As a result, some may be thrown off by the lesser amount of scares in the game. But don’t worry – they still pack a punch when they happen.
The gameplay still feels great, with responsive controls for aiming and item interaction. There’s also a fine balance between action and exploration, as the game requires you to look around to find crucial things on occasion, such as a key. This is a great way to find secrets within the game, so, yeah, by all means, do some digging. You might just come across something that’s much needed – ammunition, for example.
There’s also a good dose of puzzles to solve, as well as finding certain points where you can avoid damage from bosses. One particular underground encounter, for example, will have you scrambling for a safety point when something comes rampaging at you. Believe us, you’ll want to get out of the way.

A Vivid New Experience
Where Village truly shines is in its presentation. Capcom did its homework when it came to revamping the atmospheric touches of Resident Evil here. It looks remarkable on the PS5, as well as on the Xbox Series X, thanks to sharp visuals and a fast-paced speed, running at 60 frames per second for the most part. (Lower gen hardware will offer a bit less, so be warned.)
The animations and lighting are fantastic, and the boss characters truly shine during certain moments, bumping up the creep factor in just the right ways.
The game also benefits from excellent sound, including a music score that kicks things up a notch in just the right areas (like boss fights), and quality voice acting that might be a bit too serious compared to “Jill Sandwich” related convos, but still keeps the story moving along. Just make sure you don’t skip over any dialogue – it’s well worth the listen.

Evil Lives Again
Even without its innovations in the gameplay department, Resident Evil Village is a refreshing ride when it comes to the series’ arrival in next-generation gaming. It delivers a knockout presentation that’s amongst the best to date for the franchise; and its gameplay is exciting and definitely spooky enough to resonate with fans. It’s also got some fine-tuned puzzle-solving, item-balancing and incredible boss fights to keep you busy as well. It’ll do quite nicely until we see what Capcom has planned next for the series. Or, for that matter, maybe reintroducing Dino Crisis. It would look absolutely killer with this engine. 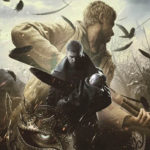