Excellent Use Of The PS5.

Anyone remember the movie Groundhog Day? Well, Housemarque – the studio that brought us Nex Machina and Super Stardust HD – has wrapped its latest effort around such a concept. But instead of working your way through a goofy town with Bill Murray, Returnal forces you on a whirlwind tale of survival, as you try to guide a heroine named Selene through a dangerous planet she’s crash landed on.
Actually, in a sense, this follows more along the lines of Edge of Tomorrow. After Selene bites the dust, she returns back to the crash site, only to discover that some things have changed, introducing a roguelike formula to the proceedings. This will likely confuse those that feel like following a pre-determined path. However, after many playthroughs, we can see that Returnal plays with this element wonderfully. In fact, it makes the game all the more mysterious – and compelling.

Hardcore Elements
First off, let’s talk about wondrously Housemarque has adapted its hardcore shooter nature into this wonderful 3D game. Sure, the game has survival 3D-style elements that are akin to Dark Souls (in a way) and maybe even a hint of Bloodborne. But the enemies and bosses fire off all sorts of bullets, forcing you to scramble and try to take them down with your weapon of choice, be it a small pistol or some other great little weapon you pick up along the way.
The gameplay is handled beautifully, recapturing the style that Housemarque grew up with, but in an all new game that incorporates them into the roguelike formula just about right. It can be tough, sure, especially after the first few deaths in the game. And losing certain items upon said death can be a bit hard to swallow. But you continue to make progress – the right way – and keep certain things, like a helpful melee-inducing blade, that really make you feel like you’re moving forward. It’s awesome stuff. 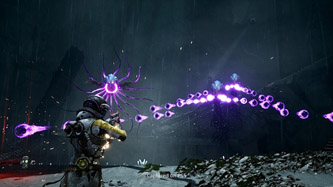 Not to mention the cool balance that comes with risks and rewards, like finding secrets that can help open up the story a bit, along with some surprisingly capable boss battles that will test you at every turn. The save system could use a little work – hopefully some incoming patches can fix that up – but overall, it’s really well put together, and worth more than one runthrough just to see what all the game has to offer. A fantastic journey, indeed.

Making Excellent Use Of The PS5
Housemarque really outdid itself when it came to Returnal’s design. It’s spooky, yes, but the planet of Atropos is hauntingly beautiful, and with each new go-around, there are some neat surprises to discover. Not to mention the enemy design, which is not only creative, but forces you to do a little digging as to what makes them tick, rather than just performing the usual run and gun. Oh, and did I also mention how smoothly the game runs? With ray tracing and a solid frame rate, nevertheless. It’s excellent overall, and probably one of the PS5’s highest accomplishments.
The sound is compelling stuff as well. It’s great to hear some of the 3D audio effects produced by the game, along with its convincingly good dialogue and haunting creature effects. If you have a good headset on hand, we highly suggest using it. You’ll get the most atmosphere you can out of it, and it pays off.
Finally, the DualSense really comes into its own here with the extra gameplay features, which already tie in with the great gameplay. It feels like Housemarque truly understands what makes this tick, and it provides a sense of wonder and bravado that few games can match. This allows Returnal to become a sleeper favorite – and one that deserves just as much success as Sony’s other current AAA titles.

Don’t Return The Game, But Return To Within The Game
Even with its somewhat glitchy save system and other slight issues, Returnal is a welcome addition to the PlayStation 5 library. There’s fun at every turn here, even in death; and its gameplay and presentation just can’t be beat. It not only defines a new turning point for Housemarque in general, but it also provides the PS5 one of its richest next-gen experiences to date. And who knows where they can go from here.
I’m interested in seeing what the team does next. Whatever the case, I’m sure they’re not down to “drive angry.” 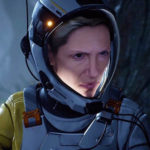