You’re going to die, but here’s how to master it.

We’re just about finished with our review of Returnal, Housemarque’s spellbinding – and challenging – action game for PlayStation 5. But before you jump into this game, you’ll need to take a few things under advisement.
Dying is just as important as staying alive in some cases, as you’ll be told some information through flashbacks and second tries. So, right off the bat, just realize that you’re going to bite the big one a few times, no matter how skilled you are.
Outside of that, here are a few tips that will help keep you going through this game, which is really something else on PlayStation 5.

Master The Dash
While your character doesn’t always have the greatest weapons out there (and will probably lose some after death), there is one thing working to their benefit – dashing. As you get started in the game (and before you run into the big boss that will wipe you out), you’ll want to take the time to master your dash technique.
By dashing, you’ll move out of the way of crucial attacks. You can get the hang of this at first as you come across enemies that shoot bullets your way, getting an idea of how it comes together. It also applies a very brief period of invincibility, so don’t be afraid to use it when it comes to getting through laser walls and avoiding certain bullet streams.
Just keep something in mind, though. There is a cooldown period for your dash, so you won’t be able to use it continuously. However, it’s not too far out to the point that you’ll be without it at a crucial time. Just make sure you use it when absolutely necessary in fights, and prepare for
when you’ll have it available next. It’ll keep you alive a little bit longer this way.

Your Weapons Are Your Friends, But Embrace The Blade
Over the course of Returnal, you’ll come across various weapons that can come in handy. But, again, you’ll probably lose some big ones after you die, forcing you to recover your tracks and find something new. But there are two tools that are handy over the course of your adventure. 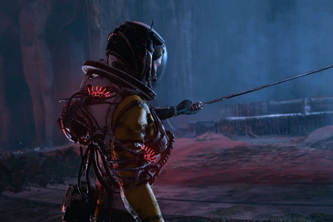 The first is the pistol. You’ll pick this up in the beginning, and as you go on, you’ll discover it has two firing modes. The standard firing mode is good for quick shots, which you can execute by hitting the R2 button. However, once you unlock it with the Atropian Weapon Charger (also in the first biome), the alt-firing mode can help you out against tougher opponents. The game’s DualSense controls really take advantage of this, so practice where you can.
The second tool is the Atropian Blade. This is a melee weapon that you’ll find within the first biome in the game. Be sure to track it down. It’s not just handy for hitting an opponent that gets close to you, but can also break through certain walls, which can hide crucial items. Just remember, like the dash, it has a cooldown period, so don’t go all Samurai Jack on everybody.
Also, when you do have weapons with higher levels, we advise you hold off on using it right away. It may be tempting, but you’d be surprised how powerful your pistol is by comparison.
Check the attributes and see what works best for you in given situations. Finally, be sure to check out the Daily Challenge. This is a fantastic way to get the hang of weapons and combat, and can get you ready for the game in general. Be prepared for some difficulty, though – it’s called a Challenge for a reason!

Explore And See What You Can Find
While Returnal is generally built around its combat, the game does have exploration features that are truly helpful. For instance, looking around the biome can get you some cool stuff, like the aforementioned blade and alt-fire technique. But there’s more, depending on where you’re looking.
For example, when you die, you end up back in your ship. Don’t rush out to your next run just yet. Instead, look around at the ship’s log to get more information. For that matter, you can also check out Daily Challenges here as well.
You’ll also want to consult your map. This is incredibly useful when it comes to seeing where you are in an area, even if you’re new to it. It’s fairly simple to read, and can make all the difference if you somehow end up being lost.
Also, look for glowing objects. These can add a lot to your inventory, though, if something glows purple, there’s a crapshoot involved. Sometimes it can be a helpful key, but other times it could malfunction something in your suit. Don’t be afraid to take a closer look. After all, the worst thing that can happen is death – and that’s going on anyway. With these basics – and a little bit of patience – you should have no trouble taking care of whatever Returnal hands you. Good luck!