Returnal Changes The Game On PS5

Housemarque has a grand slam here.

When Housemarque announced that they weren’t going to make shooters like Nex Machina and Resogun anymore a while back, that was a cause for concern.
After all, that was the company’s forte, adapting classic old-school formula into shooters like the ones above, as well as Super Stardust. And for a while there, it
was a bit concerning seeing what it had in mind next, including a foray into free- to-play that didn’t quite work out the way it was hoping.
But it seems that concern has been wiped away with Returnal, which we previewed a little while back. With its arrival on PlayStation 5 today, Sony seemingly has another grand-slam hit for its PS5 platform, a game built from the ground up with neat rogue-like elements wrapped around Housemarque’s traditional shoot-em-up elements. To put it bluntly, it’s taken what it’s known from its previous games and wrapped them around something entirely new – and as a result, it may have created its biggest effort to date, setting the stage for what could come next. In other word, it’s found its footing with a next-gen surprise while keeping true to its roots. Miracle achieved.

Granted, we’re still saving all our details for when we finish the game, but upon first glance into the game, there’s an awful lot to like here. Let’s break down specifically what makes Returnal work so well time and time again – living up to its name, so to speak.

Something New, Yet Familiar
As we’ve talked about before, the game takes place on a mysterious planet called Atropos, which practically changes up with each time you play through. As the character Selene, your job is to visit the planet after a crash landing as you attempt to get some answers.
What’s interesting here is that, after each time you die, the planet changes. It’s a procedurally generated design that makes things interesting for each playthrough.
That makes it a roguelite, but that actually (and ingeniously) ties in with the storyline, putting Selene through an Edge of Tomorrow-esque scenario. This game plays it seriously throughout, with enough shoot-em-up excitement to keep you enthralled with each life you have.
Like the best kind of Dark Souls-like encounters, you have to run Selene through her paces as she faces creature after creature. She’ll use her skills to dash her way past certain attacks while filling her opponents with ammunition, as you study the bullet hell-style patterns that each one throws at you. Like we said, similar to Housemarque’s roots, but with some new elements to keep things really cool. The fights aren’t just filled with intensity, but are also a beauty to behold, taking advantage of the PS5 hardware with exquisite design. Each corner of the planet is something else.

Progress To Grow
There’s some neat progression involved with Returnal, particularly with the stuff you can upgrade to. Though you start out with just a pistol, you can make progress depending how well you survive, adapting to new weapons and other great skills that prove useful for later battles. You just have to “get good” enough to unlock some of these abilities and survive a little longer. The better you do, the more you earn. 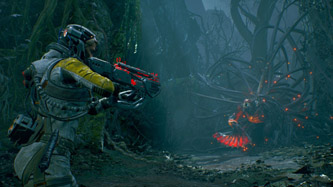 Not that the game’s impossible by starting back at the beginning, because, again, it’s all how the story ties in. But with each new run, you’ll have new randomly given weapon traits and other things to try out, and you’ll learn as you go along and see what sticks best.
Not to mention that it takes advantage of the DualSense PS5 controller when it comes to adaptive controls and 3D audio. In fact, Returnal seems like a game custom built around the controller, taking advantage of each of its specialties.
That makes it more immersive than a mere port built for the system. In a sense, this is PS5 gaming that’s truly evolved, and just months outside of the platform’s release. Not bad, especially considering what it can lead up to for other titles.

A Full Analysis Inbound
We’ll see all our impressions for a review early next week. But Returnal could easily set the stage for great gaming in the future, while reminding us how great a studio Housemarque is when it comes to its amazing shooter experiences. It’s just the right level of evolution for the studio, and a promising look at what could be coming next. We can’t wait to dive further into this world to see what it holds for us. Bring it on.
Returnal is available now for PlayStation 5.