What The Mortal Kombat Movie Gets Right

Warner Bros. and New Line Cinema released the new Mortal Kombat movie over the weekend, making it available in select theaters and via streaming on HBO Max.
Thus far, it’s off to a great start, grossing $22 million in the U.S. and around $50 million worldwide. That’s not too shabby considering the pandemic and all – and it opens the door to the planned trilogy of films for the series.
There have been some mixed criticism about the film, namely with its pacing and its characters.
But, we’ll tell you what, we’ve had a ball with it. It nails down everything you’d want from an R- rated Mortal Kombat film, particularly with the fatalities. Yep, they’re gruesome and awesome.
Grue-awesome, if you will.
So let’s talk about what the new movie gets right for the most part. There are minor spoilers ahead, but most of you have seen the film anyway, so let’s just dive in.

Casting
The overall casting is excellent, despite mostly lacking big, recognizable AAA stars. But there’s a lot of talent on display here.
Among them, and leading the charge for his little time on-screen, is Hiroyuki Sanada. The veteran actor, spotted in Avengers: Endgame a couple of years ago, is great as Scorpion, though we also get a good look at what he is before then – a warrior named Hanzo Hasashi, who eventually settles in to family life. But the dangerous Bi-Han, aka Sub-Zero (Joe Taslim of The Raid fame – excellent here) has other plans.
That’s all I’ll say, but their feud is excellent and really adds spark to the film. But it’s not all them. 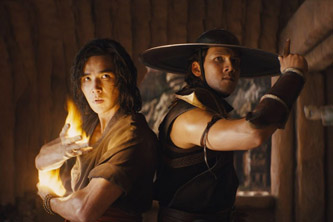 Josh Lawson of Anchorman 2 fame steals the show as Kano. We’re gonna say it right now, because not only is he hilarious, but also quite manageable once he learns about the effectiveness of his eye laser. And he’s got a fight scene with Sonya Blade (Jessica McNamee) that’s a ball.
There are other great things, too. Ludi Lin is an excellent Liu Kang, matched up quite nicely with Max Huang’s Kung Lao; Sisi Stringer has her moments as Mileena, though not enough of them; and the combination of Daniel Nelson and Damon Harriman do wonders with Kabal, who’s just like his gaming self, right down to the attitude and dashes.
The only letdown here is how the film revolves around a newcomer – in this case, Cole Young (Lewis Tan). But he’s quite central to the story, and his ties with a particular character do make for interesting things. So we’ll give him a break – plus he’s great in his fight scenes.

The Fights!
Mortal Kombat is a lot of fun with its fights. Some of them do have quick cuts, but director Simon McQuoid offers solid pacing for the most part. There’s a really fun battle with an actual Reptile, who shows up early on; and the second that Scorpion and Sub-Zero hit the screen, sparks fly. (Well, ice, but sparks kinda work as well.)
Overall, the film is nicely directed for a game film, with McQuoid providing first-time duties. It does take a little bit for it to start up; but once it does, it’s a satisfying mix of visual effects and fun choreography, with some cheesy dialogue thrown in. (It’s here that Lawson manages to steal the show as Kano, even bringing in one of his best fatalities. Won’t say with who, tho.)
Overall, it captures what makes everything great about Mortal Kombat, even if it’s not 100 percent effective. Hey, close enough, really.
You can check out Mortal Kombat on HBO Max now, or in theatres. Enjoy, blood and all!