There have been talks recently about Square Enix being considered for acquisition by various companies, per this report from Bloomberg Japan. While it didn’t note which companies were interested in picking up the mega-publisher, considering how rampant acquisitions are going these days by bigger partners, it wouldn’t be a big surprise.
Square Enix has been seeing an up-and-down year as of late, between the success of its recently launched Outriders, as well as the failure of its platforming adventure Balan Wonderworld, which hasn’t even sold enough to pay back production costs.
The company has denied such claims noting, “We do not consider selling off the company or any part of its businesses, nor have we received any offer from any third party to acquire the company or any part of its businesses” But if it did…who would be an ideal partner for them?
That’s easy – Microsoft. And here’s why.

Microsoft Needs Outreach Overseas
While the Xbox Series S and X are doing fairly well in the U.S. and European markets, it has yet to make a dent in the Japanese market. In fact, Microsoft’s systems have been this way for years, failing to find the same appeal that Sony’s PlayStation systems and Nintendo’s consoles have done.
With Square Enix in its fold, Microsoft could find some appeal with this market. The company is huge with its line-up of role-playing adventures, particularly the Final Fantasy and Kingdom Hearts brands, and Microsoft making a deal with them could allow them to make a greater impact with their systems if Square’s library were included. 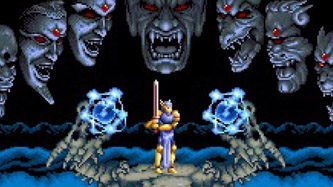 Granted, that would bring up interesting questions in terms of whether the games would be Xbox exclusive. When Microsoft gobbled up Bethesda a few months back, it assured that business
would go on as usual, though big titles like The Elder Scrolls 6 and Starfield could end up becoming exclusives for Xbox.
Whatever the case, Microsoft could benefit from having a company that knows the Japanese market, and since it wants to expand its reach there…why not?

It’s Already In Good With Square Enix
There’s already a golden partnership between Microsoft and Square Enix, judging by the offerings we currently see on the Xbox Game Pass. All the Kingdom Hearts games are available, along with a gaggle of the Final Fantasy games. And with the signing of Outriders on the service from its first day of release, there appears to be a strong agreement between the two parties.
So, with that, why shouldn’t they take it a step further? With Microsoft’s acquisition of Square Enix, it could literally offer nearly its entire library on Xbox Game Pass, furthering its success as Microsoft is looking to do. It worked with Bethesda, as its adding of games in the Doom and Wolfenstein libraries have expanded the reach for those potential audiences. Imagine more Final Fantasy and other obscure titles doing the same.
It could also give Microsoft access to various Square Enix classics, in the hopes of giving those a second chance at life both with general game releases and Xbox Game Pass exclusives.
Wouldn’t it be great to get another thrilling chapter in the long-lost Actraiser saga? Or, for that matter, a sequel to Chrono Trigger and Chrono Cross that we’ve been wanting for what seems like an eternity? With this deal, Microsoft could give the green light and finally make these happen – or, at the very least, offer the originals.

Don’t Expect Too Quick A Deal, But Do Expect Talks
With Square Enix’s statement, it doesn’t look like a deal is expected to be reached anytime soon.
However, as we’ve seen in the past, these announcements can literally come out of nowhere. Bethesda did, one day suddenly announcing that they were part of the Microsoft family. Square Enix could easily do the same, and off of the smallest of news – like the continued failure of Balan Wonderworld. (Sorry, it’s just not that good of a game.)
We’ll see what E3 2021 brings in a couple of months, as Microsoft will take part in its digital presentation somewhere around the first day. It’ll be interesting to see what comes at that point. What do you think? Would Microsoft and Square Enix make a great team?
Want to win a PlayStation 5? We’re giving one away!