It’s kind of interesting how Sega’s The House of the Dead series has grown over the years. It saw a number of arcade releases before the company opted to make a special home game, Overkill, that took more of a humorous Grindhouse sort of approach. Soon after, however, the company returned to arcade form with the deluxe-sized Scarlet Dawn, which has been a big hit in some locations.
So…what’s next? Well, oddly enough, the next chapter in the series isn’t coming from Sega, though they are on board as a licensing partner. Instead, it’s coming from Forever Entertainment, the publisher behind the successful Panzer Dragoon Remake that came out a little while ago. It’s hard at work on a remake of the original House of the Dead, which is set to arrive on Nintendo Switch later this year. And you’d better believe that the zombies are back – and out for more blood than ever before.

Curien’s Up To No Good
The game loosely follows events based on the 1996 arcade and Saturn game of the same name. Not much is known about the story, but we do know that the nefarious Dr. Curien is involved,
experimenting on undead corpses and other unholy things, in the hopes of potentially taking over the world. As one of two government agents, it’s up to you to stop him before he goes too far.
House of the Dead Remake conceptually follows the same formula as the classic shoot-em-ups. 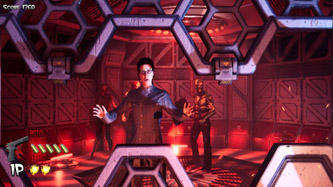 You’ll have to fend off zombies while handling reloads as quickly as possible, or else take damage from each time they strike you. You’ll also need to prepare yourself for boss encounters, which pop up every so often as Curien throws a super-powered mutant your way.
(With a weak spot, of course.)
The game will feature “modern” controls, which means Forever will likely embrace different ways for players to enjoy the game. Probably the best bet is using JoyCons, which can mimic light gun-style control with aiming and precision. There will also likely be an option to play with a Switch Pro Controller, which could double as a gun with a crosshair on the screen using its motion controls. As for how it’ll play in portable mode, that’s hard to say. There’s no word on whether it’ll have touch-screen controls or require something different.

Not A Normal-Looking House Of The Dead
The developers at Megapixel Studio S.A. are pumping the visuals in House of the Dead Remake to extraordinary life, as it’s looking like one of the deeper – and creepier – entries in the series.
Based on what we’ve seen in the trailer, the game’s design is staying quite loyal to the saga.
However, it’s also inserting various details that make it stand out, particularly with lighting and atmospheric touches. Oh, and of course the zombies explode nicely – it is House of the Dead, after all. 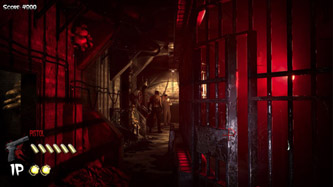 The audio sounds changed-up too, for better or for worse. That means a bunch of re-recorded dialogue to make the game’s sinister tone be a little bit more modern. So why did we say “for worse”? Because we miss some of the campiness that comes with the way the dialogue came across in the original game. Fingers crossed that Forever includes an option to turn that on, for nostalgia’s sake.
As for the game’s replay value, there will be multiple endings, just like the Saturn version. It all depends on how good a shot you are – and how many innocent scientists you save. Hint: maybe don’t shoot them, yeah?

Get Your Dead On
The Nintendo Switch doesn’t have many light gun shooters to its credit, so we’ll happily take House of the Dead Remake into our library. Its visuals look sharp thus far; and the gameplay should offer a lot of options, with Megapixel hard at work on making it as accessible as possible.
Now it’s just a matter of seeing what additional content becomes available in it as we prepare for its release later this year.
And fingers crossed there’s more to come. There are various chapters of House of the Dead that can be covered in Remake form, and we all know fans are down to suffer like G did.