Fortnite has seen a who’s who of stars stop by over the past few months, from Marvel’s Avengers to Kratos from God of War to Master Chief from Halo. But now, another exclusive PlayStation star will soon make her debut in the game – that’s right, Aloy!
The star of Horizon: Zero Dawn and the forthcoming sequel Horizon: Forbidden West is available in the game starting tomorrow, as part of a Horizon Zero Dawn Bundle that will be available in the shop. These include a special glider, a tech bow, two outfits and some other great goodies, inspired by the hit Guerrilla Games series. And this is for all versions of the game across the board, including Xbox Series X, Nintendo Switch and PC, as well as mobile devices. 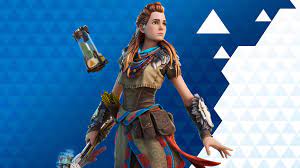 But if you own a PlayStation console, you’ll be able to partake in a special event exclusive to those platforms – the Aloy Cup! It’s unfolding starting today, and teams will be able to unlock the Horizon Zero Dawn bundle early, depending how well they do. What’s more, Aloy will team up for the first time ever with another iconic gaming legend – Lara Croft from the Tomb Raider series! That event will kick off via Duos on April 16th. But it’s only going through April 18th at 9 AM EDT, so find yourself a good partner and jump in!
Fortnite is available now for various consoles, as well as mobile devices.
Want to win a PlayStation 5? We’re giving one away!