Oddworld Inhabitants doesn’t follow the usual gaming path. And that’s fine with us, as they present great titles like Oddworld: Stranger’s Wrath and Oddworld: New n’ Tasty, games that define a generation just as well as Abe’s Oddysee and Abe’s Exoddus before it. And now we have Oddworld: Soulstorm, which introduces fans to the series like never before with a stunning entry on the PlayStation 5.
It’s not a game for everyone, as it leans on the type of gameplay that helped Oddysee and Exoddus come to light. An action tour-de-force, this ain’t. But it has enough compelling aspects – and stunning visuals – to keep fans entertained. And what’s more, it sets the stage for even more adventures for Abe, which, again, we’re completely fine with.

What The Heck Is Happening?
The game follows Abe, a Mudokon, after he’s managed to save several hundred of his kind from the tyrannical Rupture Farms, where Glukkons try to run thing with an iron fist. But with his latest actions, Abe finds himself in a position where he can rescue even more and shut down the Glukkon empire for good – though he’s a bit over his head, as they’ve created a sort of energy drink that keeps the Mudokons going on their way.
What follows is Abe’s journey back into a strange yet beautiful world, filled with dangers that he’ll have to overcome the only way he knows how – through ingenious interpretation and smart moves. Do something wrong and he’s likely fried, forcing you to try something again. But this experimental gameplay did great with his past adventures, and equally does so with Soulstorm.
What really makes this game tick is the strong combination of great gameplay and story. Lorne Lanning (the head of Oddworld Inhabitants) and his team have come up with an outstanding (yet humorous) tale, filled with challenges galore. Now, keep in mind that if you aren’t used to the way the Oddworld games play, you might find yourself stuck. But the more you get into it, the deeper an understanding of how Abe works – and how he could be an unlikely hero through all this.

Gameplay Improvements, And Those Visuals!
While Soulstorm isn’t a taste for all, this is easily the best-playing Oddworld game since Stranger’s Wrath. The gameplay system works remarkably well, particularly with the new double-jump, which cuts down on the number of preventable deaths – though you’ll still die here and there.
There’s also a remarkable morale system called Quarma. With it, you actually get rewarded depending on your actions, like saving Mudokons and avoiding laying waste to the Sligs. The game features multiple endings, all of which are worth checking out. It’s the sort of thing that keeps you digging within the game – if the slightly higher difficulty doesn’t quite throw you off.
As for presentation, Lorne and his team have been preparing nicely for the PS5. The game runs gorgeously at 60 frames per second, with lovely side-scrolling visuals that pack more depth than most open-world games. Yes, even in 2.5-D. There are times that bugs enter the picture, but not enough to really throw off players. We didn’t get to test it on PS4, so performance may vary.
The audio is excellent, with a fun soundtrack, humorous Abe-speak (PBBBT) and great voice acting in general. Oddworld Inhabitants definitely did their homework here.

Worth The Soul Search
If you didn’t get into the previous Oddworld games, you might be a little hesitant to jump into Soulstorm. However, fans and those interested in playing a unique platformer will want to hop in without hesitation. Its stunning visuals, combined with improved gameplay and hours’ worth of multiple goodies, will keep you journeying with Abe longer than you’ve imagined.
And, honestly, I’m eager to see what Oddworld is up to next. A sequel to Stranger’s Wrath with a next-gen touch wouldn’t be bad at all. 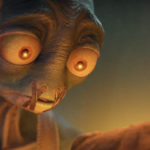