There are Battle Royale games…and then there’s Nintendo’s Battle Royale games. They’re in a class by themselves, because they allow players to compete in innovative ways, rather than going at it Fortnite style. Tetris 99 continues to be a delight more than two years after its introduction; and prior to its shutdown earlier this month, Super Mario 35 was cool as well.
Now we have Pac-Man 99, Bandai Namco and Nintendo’s attempt at continuing the trend of Battle Royale goodness. But this time, your job is to stay alive in a classic maze of the game, all while avoiding ghosts and obstacles and continuing to build up your score. It’s a simple concept, and not without its minor flaws, but it’s amazing just how addictive this game really is. You’ll be Pac-king it in with matches all night if you’re not careful.

Chaotic But Fun Gameplay
You’re thrown right into Pac-Man 99 without so much a tutorial, so it could be confusing at first. However, if you understand the core rules of the classic dot-munching game, you’ll get the gist. Your job is to keep alive as long as you can, using power pellets to chomp away at ghosts while trying to avoid obstacles that pop up from opponents, like shadow Pac-Men that can slow you down and red ones that can end your run instantly.
Turnabout is fair play, so, as you take part in a match, you can also launch obstacles at certain players by chomping ghosts and continuing to progress. It’s a cool idea, and it works really well once you’re connected in a match, which doesn’t take too long at all. 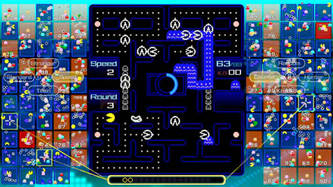 What’s more, as ghosts pile up, you can create “ghost chains” akin to Pac-Man Championship Edition 2, where you chomp up to 30 at one time and clear a part of the screen, while sending all sorts of adversaries at your opponents. You can form these and execute them rather easily, though you might want to memorize the timing of when they’ll change back to their normal selves.
Again, Pac-Man 99 is built on basic principles, but it’s highly addictive and wonderfully designed. And the core free game – hooking up against 98 other players – is free. But there’s more where that came from if you’re a fan of the gameplay.

What’s The Deluxe Edition Buy?
Along with the core game, Pac-Man 99 has a Deluxe Edition for around $30 that features a number of unlockable modes. These include a CPU Battle mode, a great place to practice your skills before you take on others; as well as the ability to set up Private Matches with your friends. It’s a mild bummer that such a feature is hidden behind the DLC, but it makes sense when it comes to earning back some development dollars.
For good measure, the Deluxe Edition also comes with bonus skins based on a number of classic Namco games. Some of these are definitely distracting, particularly the weird take on Galaga and the Lego-ish design of the Pac-Mania inspired stage. But it’s a neat package for nostalgic fans, and it keeps things surprisingly fresh as you go on. Again, you don’t have to invest, but it’s not a bad deal at all. And you get to keep this one, unlike Super Mario 35.

This One’s A Winning Chomper
Pac-Man has found various ways to return to the general gaming scene these days, like with Battle Royale and the Championship Edition games. But Pac-Man 99 is the most innovative to date, a fantastic multiplayer romp that’s a lot of fun to play. You do have to pay to unlock the gist of the game, but there’s a lot for your dollar here, particularly if you’re a fan of the classic Bandai Namco library. And online works wonderfully, so you can hook up with random players and friends with ease. Don’t hesitate to chow this one down in your game library. Waka waka wow. 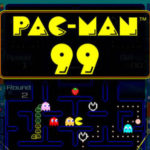