Cowabunga says it all!

“The beat-em-up is dead,” you say? Hardly. Over the past few months, we’ve seen a resurgence in the long-lost genre, particularly with Dotemu’s amazing Streets of Rage 4 and Ubisoft’s return of Scott Pilgrim vs. the World. And soon enough, the Teenage Mutant Ninja Turtles will get a turn.
After making their presence felt in not one but two classic Konami games (the original and its entertaining follow-up Turtles In Time), the Ninja Turtles are back in a new brawler, Shredder’s Revenge. We talked about this previously, but wanted to give this one a closer look because it’s pretty dang special. In fact, dare we say it’s worth yelling “Cowabunga!”

The Turtles Bring The Talent
The game will be published through Dotemu – the same studio behind the new Streets of Rage, as mentioned above – and is currently in development at Tribute Games. Not only do those guys know old-school fare like Mercenary Kings and Flinthook, but they also have a pair of team members that worked directly on Scott Pilgrim so long ago. 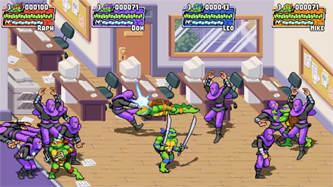 Not to mention that Nickelodeon is fully on board for the project, meaning that it’s officially licensed and will run the gamut at various characters from the classic TV series. That’s right, it emulates the old-school kind of Turtles, instead of the new product we’re currently seeing on- air. That means Bebop looks like Bebop, April O’Neil pops up…heck, even Master Splinter is here, as you can see in the trailer below.
Details about the story are light at the moment, but here’s the gist – Shredder has once again returned, and, as usual, is up to no good in the city of New York. It’s up to the Ninja Turtles to stop him before it’s too late.

Classic Turtles, Through And Through
Like the classic Ninja Turtles arcade games before it, Shredder’s Revenge will feature four-player action. There’s no word yet if that’s local only or online, but we’re guessing there will be an option to connect with others, in case you need to work alongside a turtle crew that’s not on your couch. 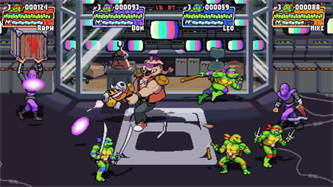 The gameplay will be based around beat-em-up tactics, and, as you can see, Tribute means business. One of the screenshots even shows the classic “screen throw” move, in which the
Turtles hurl enemies right at the player – straight out of Turtles In Time. It will, however, also have some “super-fresh mechanics” to keep things interesting, particularly during the boss fights against Shredder and his goons. There will also be vehicle stages as well, though we haven’t seen those in action yet.
And there’s a slight chance that the game will also include additional playable characters.
Tribute hasn’t confirmed this yet, but we do briefly see April and Splinter in action in the trailer…which, by the way, has Faith No More’s Mike Fallon on vocals. Hopefully, we’ll hear more good stuff like this in the final release.

It’s Pizza Time, Dudes!
At the moment, Teenage Mutant Ninja Turtles: Shredder’s Revenge doesn’t have a release date.
However, it’s expected sometime this year for PlayStation 5/4, as well as Xbox Series X, Xbox Series S, Xbox One, Nintendo Switch and PC. Needless to say, the wait will be worth it, dudes!