When you think “Capcom” and “fighting game,” usually you think of something that stems from the company’s 2D roots, like the Marvel vs. Capcom series or a title from the Street Fighter lexicon. Very rarely do you think of anything 3D-related, except maybe the Street Fighter EX series.
Unless, of course, you owned a Dreamcast like a did. It was here that the Power Stone saga was born, with the first game coming out in 1999, near the launch of the system, and creating a wonderful fighting experience for multiple players.
Rather than duking it out on one plane, Power Stone took place in 3D arenas, using all kinds of crazy combatants and mixing up changing conditions on each stage, as well as weapons that could change the course of a fight. It was kind of like Super Smash Bros. in its own little way, but took things to the next level with its ten diverse characters.

Power Stone 2 followed closely behind just a year later, with even more characters, more modes, additional stages and more four-player beat-em-up action. It’s become quite the collectible ever since, with copies going for well over a hundred dollars on eBay, usually to the highest bidder.
Since that time, Power Stone Collection has only been released as a PlayStation Portable/PlayStation Vita game. And once the PS Store closes down this summer, it’ll be nothing more than a memory. And that, folks, is the primary reason why we need to restart the saga with a fresh third chapter.
There’s a lot to consider here. First off, the Power Stone vibes have continued to flow for years, even if we haven’t had a fresh entry in the series in over two decades. People still turn to the game for entertainment on the Dreamcast and their portable Sony systems, wowed by the ingenuity that Capcom’s team put into the game. That alone should make for a good selling point for a sequel on the PlayStation 5 or Nintendo Switch (or, hell, even the Xbox Series X – gimme!). 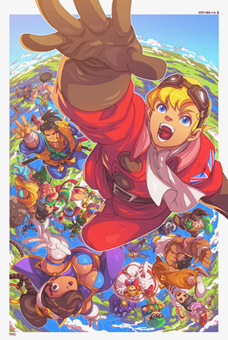 But there’s more. Nostalgia is a huge draw for a series like this, and a fresh chapter, complete with new stages, returning and debuting characters, online play and tons of modes, would make for a welcome return. Not to mention that Capcom knows how well its franchises sell with follow-ups, like Ultimate Marvel vs. Capcom 3, the recently released Monster Hunter Rise and the upcoming Resident Evil 8: Village, which drops next month. Sequels sell.
The series also benefits from a simple yet highly addictive style of play, in which players of all skill levels can easily enter a match and see how they fare against others. Sure, experts could embrace certain strategies; but as a whole, the Power Stone games are quite user friendly – and a blast to pick up and play. Power Stone 3 could easily have this level of mentality, which would serve well within the community.
And finally, Capcom would have yet another feather in its cap with the fighting community, instead of the same old Street Fighter circles it’s been running for years. People like fresh stuff, as both Mortal Kombat 11 and Dragon Ball FighterZ have proven; so it doesn’t hurt to expand and try something out. And we know damn well that Power Stone 3 would be an immense hit on the fighting market, especially if it debuted at someplace like EVO digital, or maybe even during the Capcom Pro Tour once it starts running again in a post-COVID era.
All we know is that the Power Stone series has long been dormant, but has gained a following that shows just how far it’s come over the past couple of decades in terms of popularity. We’ve already heard whispers of a potential Power Stone remaster for current systems, and, hopefully, that’s just the testing ground for something even bigger to come. We shall see soon enough.
In the meantime, relive the series’ classic action below. We assure you…it’s “powerful!”