The Impact Of Def Jam: Fight For NY

EA gave up on this franchise too quickly.

When the PlayStation 2 era came around, it introduced us to a generation of games we figured we would never see again. Sequels to long lost favorites; introductions to new franchises that stick around today; and even some quirky, oddball titles that remain in our collections merely for sentimental reasons.
It was also a time that Electronic Arts took more chances than it does nowadays. With games like SSX. With games like NFL Street and NBA Street, two franchises that went away all too soon.
And then…there was Def Jam.
The company teamed up with the label to create not one but two powerhouse wrestling/fighting titles during the PS2 era, before things eventually fizzled out with a straight- up beat-em-up called Def Jam: Icon. Before that, however, it introduced a legendary game that continues to garner quite a bit of attention today.
In 2004, the company released Def Jam: Fight For NY, a sequel to its best-selling wrestling game Def Jam: Vendetta. It established more of a storyline than the original game, while opening up its roster to include a who’s who of rap superstars, from Snoop Dogg (who portrayed the game’s main villain) to Funkmaster Flex. It wasn’t a complete roster, but, man, was it loaded.
And yet, EA hasn’t revisited this title, mainly due to rights or lack of interest or both. But it continues to be a much cherished fighting/action game, mainly due to its competitive edge and great gameplay. It draws top dollar on the eBay front, with copies on GameCube, PS2 and Xbox selling for well over $100 complete.
Why is it? What makes this game so special? Well, a number of things, really.

A Fighting Style For Everyone
Though Def Jam: Fight For NY is primarily a wrestling game (produced by the good people at Aki Corporation with some help from EA Canada), there are various styles that are incorporated into its match-ups. These include wrestling, sure, but also street fighting, kickboxing, martial arts, and submissions. With each one, you can partake in fights with characters, and then watch as they dive into the crowd from a knockback, only to be shoved back into the ring without losing any energy in the match.
Along with strikes, you could build up Momentum by perfecting special moves with your character, as well as countering any incoming attacks. Like any good wrestling game, you could also incorporate taunting into the match, showing off to your opponent and leaving yourself vulnerable for a mere few seconds. Building up enough Momentum created the opportunity to pull off a Blazin’ Taunt to really show off, followed by a devastating Blazin’ Move to possibly finish off your opponent – or, at the very least, do a ton of damage. Once their energy bar runs low, you can engage in a Knock Out and finish them off. 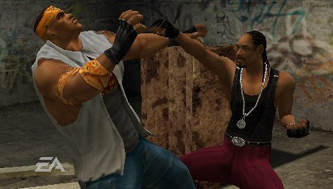 The game also features a heavy amount of customization for your character, who you build up over the course of the game. This includes improving their techniques, as well as their overall style with a number of clothing options. It really was a dream come true putting together the ultimate “baller” within the game.
Def Jam: Fight For NY’s style is brutal, but also highly effective – and more importantly, a lot of fun to play.

A Great Looking – And Sounding – Game
Of course, gameplay can win over players in a game like this, without much care about its presentation. Just ask anyone that plays something dated like WWF Wrestlemania 2000 or WCW vs. NWO: World Tour, two of the biggest wrestling draws from the N64 era.
But Def Jam: Fight For NY doesn’t hold back in the least when it comes to its presentation. Like Def Jam: Vendetta before it, Fight For NY features some amazingly stylish visuals and music, to represent the Def Jam brand to its fullest for the time.
The wrestlers themselves look phenomenal, just like their real-life counterparts, but with a bit more muscle and, of course, technique. They’re not over-inflated like in WWE All Stars, mind you, but they come off with enough bravado to look intimidating, so that they actually back themselves up in the fight when they need to. Even Snoop Dogg’s character, Crow, looks absolutely intimidating.
Not to mention the roster, which is loaded. Even non-superstars like Carmen Electric and Danny Trejo (yes, Machete!) appear and add something to the mix, along with the huge roster of Def Jam superstars. We’re talking over 60 stars in all, along with created characters, to create a robust roster.
The arenas are amazing too, going outside the usual wrestling ring and instead recreating what looks like an authentic New Your underground fighting circuit, complete with cheering crowds and some brutal-looking finishers that could send someone to the hospital with secondhand burns. It’s rad how great the game looks after all these years – and a shame that no one went for an HD version to perfect the look. 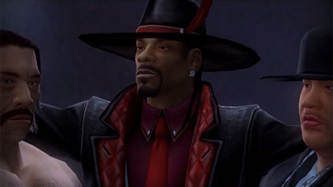 The soundtrack is jam-packed too – literally. There’s a lot of great tunes from the various artists within the Def Jam label, with varying beats that fit right in alongside what Vendetta had to offer. And it’s a nice change of pace from what previous wrestling games had to offer with their generic rock. This really meant something for its time.

Worth Hunting Down? We Think So
Anyone who’s a classic game collector deserves to have Def Jam: Fight For NY in their collection. Sure, the GameCube version might have a few folks missing (mainly due to data storage); and it’s not online like a lot of people want. But it’s outrageously fun to play, packed with brutal fights for you and your friends to partake in. It looks splendid, has an excellent soundtrack, and comes with a roster that has more than enough superstars to take control of.
This, combined with Vendetta, makes for some fierce additions to your classic game collection.
My hope is that, at one point, EA does some sort of revisit to this franchise. It may not have the impact of Fight For NY, but, damn it, it deserves a respectful return. Especially now, when we’re aching for some good wrestling fun to turn to, particularly in the face of a pandemic.