Time to get medieval.

Let’s say that you’re in the mood for a fun multiplayer game. But you’re not really fond of taking on players with the usual round of machine guns. Well, Tripwire Interactive has something that may be of interest to you.
The developers at Torn Banner Studios are finishing up work on their long-awaited Chivalry 2, which will make its debut on consoles alongside the PC version on the Epic Games Store. The game will feature full cross-play compatibility, so you can challenge both your fellow knights and rogues across the board. And yes, it works on next-gen consoles as well, including Xbox Series X and PlayStation 5.
As the game nears its Cross-Play Closed Beta for all those that per-order from Friday, April 23rd through Monday, April 26th, we thought we’d take a closer look at the game to get an idea of what’s in store. Better keep that sword sharp!

Medieval Combat
As the title indicates, Chivalry 2 is all about the mastery of medieval combat. You’ll have a number of melee weapons available to carve up your opponents, as well as a bow for those of you that prefer arrows from a distance. 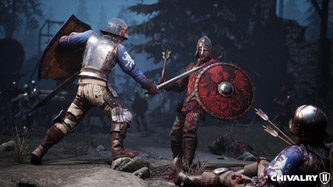 But that’s not all. You’ll also be able to use a number of items within the world to challenge your opponents. These include Ballistae, Catapults, Trebuchet, Battering Rams, Mantlets, Spike
Traps, and even Ladders if you feel like getting a height advantage. You can also set traps for incoming players, including bear traps, which can inflict a whole lot of damage for your side.
And at one point, you’ll even be able to subdue an opponent with a flaming chicken. Now if that’s not a finger lickin’ good time, we’re not sure what is.
Chivalry 2 will also have a large assortment of modes to choose from. There will be those that run the usual gamut in the Chivalry world, including Team Deathmatch and Free-For-All, for those of you that prefer to be your own soldier. But the real one that will take focus is Team Objective, which will offer a number of goals to meet alongside your teammates. The real question is if your squad is up to task.
The combat system in Chivalry 2 looks to be second to none, thanks to a free-flowing combat system that’s fun to take advantage of, as well as real-time strikes that have to be mastered just right, lest you get laid to waste. Don’t go all Tekken up in here, because you’ve had it.

Two Sides To A Story
Along with sharp visuals that take advantage of each of the system formats and great sounding effects, Chivalry 2 also has some solid backstory to help get you into the fight.
There are two different sides to choose from. The first is the Mason Order, highlighted in the trailer below. “Inspired by the virtues of strength, merit and dominance, the Mason Order has no respect for the weak and seek to crush any who oppose them.” Sounds like a group to take to task when it comes to being all-out dominant, eh?

Prefer something a bit more noble? Go with the Blue and Gold, the Agatha Knights. They “are instilled with a strong sense of loyalty, duty and honor, and believe themselves to be the rightful rulers of the land.” The real question is who’s going to be left standing when the dust settles.

No matter which team you choose, up to 64 players can take part in each skirmish, with 12 different subclasses to choose from. Probably the best one to start with is the Skirmisher, who can do damage both up close and from afar with a genuine balance. Of course, it doesn’t hurt to experiment with others to see what they can do for you.

Chivalry’s Not Dead, But You Might Be
It’s still going to be a bit for Chivalry 2 to make its official debut, as it’s not slated to arrive until June 8th. However, pre-orders are open now across all platforms, and remember, those that do so can take part in the closed beta to see how the game measures up. Check out the gameplay footage below and prepare to go crazy with your blade of choice! Good knight to ya!

Don’t have a PlayStation 5 yet? We can help with that!