Longtime game veteran Yuji Naka definitely has his moments. A lot of them came within the world of Sonic the Hedgehog, thanks to meaningful gameplay that, all these years later, still hold up incredibly well.
But then you have his other games, which, unfortunately, can’t hold a candle to the Blue Wonder. A few years back, he tried his hand with Rodea the Sky Soldier on Wii U, and it was so unplayable that we literally found ourselves turning to the included Wii version instead, since it played soooo much better.
And now we have Balan Wonderworld, Naka’s attempt to return to the “good ol’ days” of platforming, with some help from Sonic co-creator Naoto Ohshima and the publishers at Square Enix. Upon hearing about this game, there was some actual excitement, as it promised a return to form for the genre. However, upon playing the finished game, we can’t help but wonder if the return to form meant playing dated stuff like Bubsy 3D – because this game just has so much going against it.

There’s Some Story Here, We Think?
The game’s storyline has a slight bit in common with NiGHTS Into Dreams, but without most of the charm. You basically play as either a boy or a girl that has seen better days, but then, suddenly, get whisked into the dream world of Balan, a weirdo that has a top hat for a head. No, we don’t get it either. The kids basically have to work with this, um, guy as he attempts to guide them through his world, using a variety of special abilities. That’s…about it. 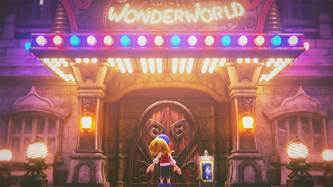 Some of the cutscenes have that NiGHTS-like charm, but the rest of the game just doesn’t. Part of the problem is the uneven level design. Some stages are excellent when it comes to design, but then others drag on without any real inspiration. In fact, they’re such a slog that you may find yourself yearning to go back to more of the fun stages. It’s like Naka was spot on with his game prowess some days, and then others he dragged and decided to keep it in the game anyway. We haven’t had this much of an uneven game experience since Duke Nukem Forever.
What’s more, the power-ups aren’t exactly innovative. Some are neat, like, um, a wolf that can create a whirlwind, but they’re not particularly useful. In fact, most of the one-note gameplay is weak as a whole, taking advantage of ideas and then not really going anywhere with them. As a result, the game just feels uneven to play. And what’s worse, you can spend a good amount of time trying to get a hold of a power-up to take advantage of, only for a better version of it to pop up later. So, what was the point of all that effort again…?
Only the boss fights hold any kind of long-term appeal, mainly because of how you can get them defeated. Some are simple to overcome, while others require figuring out a pattern – straight out of Naka’s old-school playbook. They keep the game from completely failing, though getting to these battles can take a bit of time.
Aside from that and a cumbersome power-up system that involves spinning for points with the help of birds (yeah, it’s weird), Balan Wonderworld doesn’t have too much here to keep your interest going for the long-term. And that brings us to the presentation, which isn’t that grand on the PS5.

Is It Broken, Or Just Dated?
Balan Wonderworld does have some of that 90s style charm going for its design, particularly with some of its weird characters and set-ups. But that also introduces another problem – not taking advantage of the hardware that the game is on.
We’re talking about PlayStation 5 here, right? Hell, even on the PlayStation 4, Naka and company could’ve taken advantage of the format and really stretched out these worlds to imaginative levels. Even Rodea the Sky Soldier looked great on the Wii. But here, Wonderworld just fails to impress. 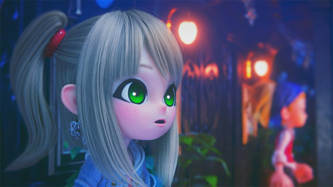 The visuals can move at a good pace at times, but the sometimes cramped level design will likely give you a headache. What’s more, some of the characters, like dancing wolves, feel wasted instead of offering any level of interaction. And that’s not to mention the camera issues or the bizarre choices of costumes that you can collect. Again, there are sparks of genius here, but they’re hidden underneath muddled game creation that may have you scratching your head.
The sound is okay as well, with some inspired tunes that come across like something you’d hear in a Naka game. But the voices are somewhat annoying instead of playful; and the sound effects offer little to no variety. Again, it feels like it’s been cut short when Naka and company should’ve run wild. It’s like buying a rock and roll album expecting to be entertained and getting some annoying commercial jingles instead.

Wonderworld? More Like Blunder-World
Oy, I can’t figure out what went wrong with Balan Wonderworld. In a way, I could kinda get an idea of what Naka and his crew were going for, but it’s executed so badly in a number of ways.
There’s moments of inspiration within the chaos, but the fact you have to get through so much to get there makes for more effort than you should need to give. As a result, Balan joins Rodea the Sky Soldier (again, the Wii U version) in the field of disappointment.
All I can hope is that Naka and the others can learn from this and really make their next effort shine. No shortcuts, no half-baked levels, no weird power-ups – just the kind of stuff that made us dare to dream, like the Sonic and NiGHTS games did. This…just feels like a nightmare. 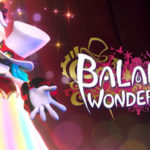