You want to cheat? Prepare to get branded.

Cheating runs rampant in games these days, so much that sometimes companies have to “clean house”, so to speak, and ban thousands of accounts from players that use everything from auto-aim to other illegal perks to get ahead. But Square Enix and the developers at People Can
Fly have a different system in mind when it comes to their new game Outriders, which releases this week for consoles and PC.
In a blog posted over on Steam, the development team talked about a number of subjects surrounding the game, such as being able to pre-load (which you can do right now), and what big changes are coming now that the demo has been received so well. But they also discuss what they’re doing with cheaters. It appears that they’ll be allowed to continue playing the game. However, there are two things that they’ll have to live with.
First off, they’ll be branded. “Your HUD will have a discreet but visible watermark placed on it so that gameplay footage created on this account can be readily identified as coming from a flagged account,” the team explained. No word yet on what that’ll look like, but it’ll be clearly evident. 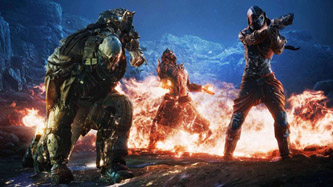 Second, they won’t be able to “matchmake with legit players.” They will still be able to play the game solo however they see fit, and can still matchmake with players that similarly use cheats.
However, being hooked up to other players will “take significantly longer.” And rightfully so, since Square Enix wants to save its server space for legitimate fans that want a real firefight without the need for aiming systems or what-not.
That said, not many players are into cheating with the game. According to stats provided by People Can Fly, “we identified 200 players who had clearly cheated” through the demo. That equates to about 0.01 percent, which isn’t too shabby at all. However, when the full game releases, obviously that stat could go up.
The company will continue to check for cheaters on a regular basis, starting on the game’s release date, April 1st. It’ll debut for Xbox One/Xbox Series S/X, PlayStation 4/5, and PC.
We’ll keep you informed on how the game turns out, so be sure to check back. And don’t cheat!