Is Next-Gen Pro Skater Worth It?

We put Tony Hawk to the test on PS5.

Last September, Activision, alongside the developers at Vicarious Visions, dropped Tony Hawk’s Pro Skater 1 & 2 Remastered, a very impressive remake of the classic skateboarding games from the early PlayStation games. They become a phenomenon once again since then, with millions of players racking up combos, completing objectives and, of course, pulling off 900’s.
But last week, Activision decided to give next-gen console owners a go with the game, offering an upgrade for those that purchased the Digital Deluxe Edition of the game free of charge. For those that didn’t, it runs about $10, and promises a number of visual improvements to make the purchase worthwhile.
Is it, though? We decided to put the game to the test on PlayStation 5 to see how it fared. Let’s go lights out, guerrilla radio!

Slightly Better Visuals
First off, Tony Hawk’s Pro Skater 1 & 2 Remastered didn’t really have shabby visuals to begin with. The game runs at a beautiful 60 frames per second, and has all sorts of exquisite lighting details to bring it to life.
So what’s the difference with the next-gen versions? Namely, 4K resolution. With next-gen, Pro Skater can actually take full advantage of 4K televisions, running at a vivid 120 frames per second in place of the usual 60. Now, if you don’t necessarily have a TV that can show that 120 FPS, you won’t see that much difference right away. 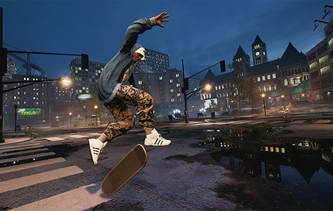 I will say this, though. The game does run at a slightly crisper clip than the original. You may need to be in the right areas of a level to see it, but it’s certainly there. The skaters look more life-like than before (not bizarrely so, as they still represent in-game models), and the levels are superb, especially the wide-open ones like the school grounds in the original Pro Skater.
But worth the upgrade? Well, if you’ve got the TV to support it, absolutely. Otherwise, you could probably enjoy the original Pro Skater as it stands from PS4 and Xbox One and not really miss a beat. There is a little more ground to cover here tho.

Offline Play And DualSense Support
With the next-gen version of Pro Skater 1 & 2 Remastered, there is the ability to take advantage of the DualSense controller in terms of more realistic vibrations. But, honestly, I didn’t notice too much of a difference in this regards. Not to say it wasn’t fun to play, because it still is. But when you “bail” on a trick, the rumble feels just about the same. There are slight differences depending on where you fail, but not enough to really notice a significant change.
Also, there is the ability to play the game offline – at least, on Xbox Series X. We didn’t see this feature on PS5 just yet, but it’s likely to come with an update. This is good news for those of you that want to practice without the need to connect to a network. But I wouldn’t call it a vital feature, just something if you prefer an old-school kind of approach.
Otherwise, that’s really about it for the upgrade. No exclusive skaters (not even Darth Maul, man!), no exclusive tracks, no soundtrack extras, nothing like that. It’s merely cosmetic with a slight touch-up in gameplay and the ability to go offline with one console. That’s about it.

So…Worth It?
Again, it really depends on if you want to get the ultimate version of Pro Skater. The original release for PS4 and Xbox One (and soon, Nintendo Switch) remains perfectly intact playing on a new console, and still looks great. The PS5/Xbox Series X upgrade is decent, but hardly anything that we’d consider a “must-have.” If you already bought the Digital Deluxe Edition of the game, then by all means, have at it. But if you didn’t, it’s nothing to rush for. It’s definitely got its moments, especially with the right television, and yet it comes up a bit short compared to other ports like, say, Spider-Man Remastered. Maybe Activision will add a little more to it to make the upgrade worthwhile. We’ll see.