Relive the old days of the handheld!

Remember the Neo Geo Pocket Color? We sure do. It was a glorious handheld for its time and some serious competition to Nintendo’s Game Boy line, but it came to an end all too soon.
Well, fret not, because you’re about to get another dose of its goodness on Nintendo Switch. 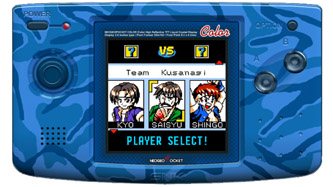 The Neo Geo Pocket Color Selection Vol. 1 is out on the Switch now, going for $39.99 and offering a ten-pack of classic titles for the system. Some titles, like SNK Vs. Capcom: The Match of the Millennium and Samurai Shodown! 2, have already been released. But it also comes with several unreleased titles, including two Metal Slug games and Neo Turf Masters.
The full list is as follows:

The collection sells for $39.99 and you have the option to play all the games in full screen or in monochrome. In addition, you can also see 3D models of both the original games and their cartridges, a nice little extra for fans.
Check out the trailer below and enjoy this fun little collection now! Now if we can just get the Sonic game to come back…

Get Control Free On PC Now