Coming to PS5 and Xbox Series this June.

Back in late 2019, during The Game Awards, a new Dungeons and Dragon project was revealed — a revamped version of the classic Dark Alliance. But instead of following the traditional route of the classic game, it was going for more of a traditional co-op, Gears of War- style vibe — and it left us quite excited for what was set to come.
And now, thanks to the developers at Tuque Games, we have a better idea. This week, the team provided a closer look at the forthcoming game, which is set to arrive on June 22nd for PlayStation 5 and Xbox Series X, as well as PlayStation 4, Xbox One and PC. And it’s got something for everyone, from die-hard D&D fans to casual players just looking to smash their way through Icewind Dale. And that way, everyone wins.

A Wide Range Of Characters
In the game, up to four players can take part in the adventure, stepping into the shoes of legendary characters created by R.A. Salvatore. These include Drizzt, Cattie-brie, Bruenor and Wulfgar, each of which bring something to the equation when it comes to taking out enemies.
As they journey across the trouble-filled Icewind, they seek out a powerful artifact called the Crystal Shard. 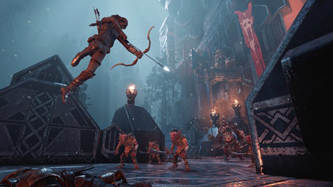 But it’s how you’ll take on these enemies that makes Dark Alliance something impressive. Each character comes with 50 combat abilities, so you can change your approach depending on what you’re in the mood to do. But there’s a balance to it, thanks to Tuque’s Emergent Combat.
Some abilities can be used right away, while others need to be mastered in order to make the most out of them. These include everything from guard breaks to team attacks to, yes, some incredibly bloody executions. This is Dungeons and Dragons, after all.
What’s more, the co-op system in Dark Alliance is wide open. You’re free to approach your
favorite missions however you see fit, and jumping in with friends couldn’t be easier. There’s also room for exploring and discovering new things over the course of your quest, so it never hurts to do a little looking around. You can also replay levels and each a new Challenge Rating the second time around, adding to your expertise — and your arsenal, to boot.
You’ll need them, too, because there are over 30 enemy types within the game, each of whom have no trouble splattering the walls with your blood. You’ll need to work closely with your team if you’re to survive.

A Next-Gen D&D Experience
We can tell you right now that Dark Alliance is a far cry from the classic PlayStation 2 games of old. Sure, some of the team tactics might be familiar, but we’re talking about a new experience that Tuque built from the ground up. 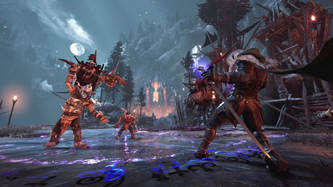 The game features fast-paced third-person combat, akin to the Gears of War games, as we mentioned earlier. But it’s obviously laced with Dungeons & Dragons style, with each character pulling off some wonderfully executed moves as they lay waste to enemies. It’s a nice touch; and the game’s imaginative design looks like something stemming from the classic boar
games, while at the same time fitting the motif of what’s to be expected from games of this generation.
The gameplay trailer below gives you a good idea of just how wild things get. It’s a bit on the brief side, but it shows just how crazy the enemy design is — as well as what kind of territory you’ll be jumping into. And, yes, that is a lava lake. The floor is literally lava there.
Also, you’ll want to be completely prepared for some of these boss encounters, because they look amazing. Big and bad creatures await to take all kinds of damage. But, again, you’re more than ready to deliver.

Ready To Dominate?
While Dark Alliance may be a bit of a step up from previous Dungeons & Dragons games (remember those awesome Capcom arcade brawlers?), it also looks to be a great way to introduce the series to a new generation of players. Its gameplay is both visceral and tactical; it makes for a great experience on your own and with friends; and it looks pretty damn snazzy.
We’ll see how the final adventure holds up once June rolls around.
Want to win a PlayStation 5? We’re giving one away!