Fortnite Getting Its Own Joy-Con Controllers

Coming your way this June, fans.

As if the Fortnite Nintendo Switch bundle wasn’t enough for die-hard fans of the Battle Royale shooter to pursue, Epic Games and Nintendo have teamed up to offer yet another pair of goodies they won’t want to miss.
Over on its Twitter account, Nintendo announced that a special Fortnite Fleet Force Joy-Con bundle will be available for purchase starting on June 4th. It introduces a pair of specially colored controllers for use with the portable Switch system, as well as with its docked mode with the special peripheral that holds them in place. 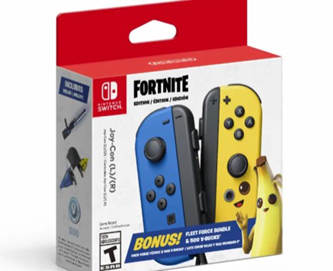 The controllers are a bright blue and yellow color, complete with a banana face on the yellow Joy-Con, representing the banana skin within the game.
But that’s not all. Along with the Joy-Con controllers, the bundle also includes 500 V-Bucks that can be spent within the game’s store on a number of items. And on top of that, a special download code for a Fleet Force item bundle will be available, including two lightsaber-style weapons and a specially designed blue and yellow glider.
The bundle was introduced as part of a kick-off for the new season of Fortnite, which officially begins today. But, again, the controllers won’t arrive until June 4th. At least it gives you something to look forward to while you lay waste to your opponents in the game. Fortnite is available now for all platforms.
Want to win a PlayStation 5? We’re giving one away!