Here’s why you should give his latest adventure a “spin.”

Five months after his return on consoles and PC, Crash Bandicoot has finally made his way to Nintendo Switch with his latest adventure, It’s About Time! Produced by the team at Toys For Bob (the makers of the Skylanders series), it perfectly channels everything that was great about Naughty Dog’s classic adventures, which previously returned with the wonderfully remastered N. Sane Trilogy.
But is the game worth picking up? Well, aside from some minor visual downgrades and a challenge that could be tough for some to overcome, we’d definitely say that It’s About Time! is well worth the investment. And here’s why.

You Can Take Crash On The Go With You
Like N. Sane Trilogy before it, It’s About Time! is all about the convenience of taking Crash on the go with you. His adventure is perfectly pint-sized for portable play, though you may notice a couple of things with the port. 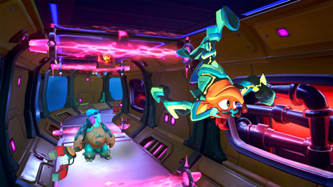 First off, it has a lower frame rate. Instead of running at a beautiful 60 frames per second like on other platforms, the game runs at 30 frames per second on the Switch. But that’s not a deal breaker by any means. It still runs beautifully with just a few minor compromises, and the gameplay still holds up really well.
Secondly, it gives you hours’ worth of content for on-the-go play. This includes unlocking those groovy N. Verted levels after you get through the fourth world, which provides a wonderful twist on previously played stages with some changes here and there. It tacks on to the game’s replayability, along with finding all the gems, the Flashback tapes and so many other goodies.
You’ll be at this for a while.
Now, if you prefer, you can also play this docked, also in 30 frames per second mode. The game looks great on the Switch, with only a few small changes to make sure it runs efficiently. We’re pleased with how the port turned out, and you likely will be, too.

It Just Feels Like Old-School Crash
What amazes us about It’s About Time! is how well the team at Toys For Bob channeled that old-school Naughty Dog feeling without talking to them. (Well, as far as we know, anyway.) The game just feels like vintage Crash, right down to the timing on his jumps, his sliding along beams, and figuring out the proper pattern for defeating the bosses that Neo Cortex and N. Tropy throw his way. 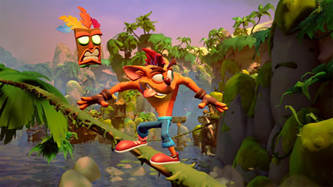 Not to mention the challenge. As I noted, the game is quite tough, especially when it comes to the later stages and trying to 100 percent everything, as some things will be out of the way and require cracker-jack timing in order to accomplish. But it’s also quite approachable for younger players too, seeking a good old platforming time on their Nintendo Switch. And they can always turn on infinite lives if the going gets too tough. There are plenty of checkpoints strewn throughout as well. How you approach is completely up to you.
But yeah, this feels like vintage Crash through and through – and that’s something you Switch owners are sure to enjoy.

Available Now!
You can pick up Crash Bandicoot 4: It’s About Time! for Nintendo Switch now through our friends at Amazon. It’s available for PS4 and Xbox One as well, and it wouldn’t hurt to get them with updates for PlayStation 5 and Xbox Series X coming fairly soon. Don’t miss this fun ride through time!