The real battle lies within.

The Nintendo Switch is capable of great things. Sure, it may not be a powerhouse like the PlayStation 5. But its capability of being able to take all of its games on the go is something else.
And with the right development team, superpowered experiences can work quite nicely on it, like the wonderful port of Doom Eternal we got a few months ago.
But then we’re reminded that sometimes, very rarely, experiences don’t work. They’ve got the “old college try” in them, but something holds them back from being good as they are on other platforms. And sadly, that’s the case with Apex Legends, Respawn Entertainment’s tour-de- force Battle Royale shooter. It does do some things right, but general performance gets in the way of taking out enemies. You’re usually battling technical deficiencies more than your friends.

Different Options, But One Way’s Easier
There are two options when it comes to playing Apex Legends. There’s a Champions Edition that unlocks everything from the previous seasons for around $40, and there’s the free-to-play version. For those that never tried the game before or have yet to see what it about, the latter seems like an enticing option. (Just make sure to clear out that memory card – it takes up a whopping 25GB of space.) 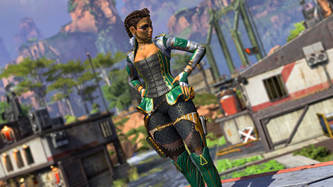 But here’s the thing. While crossplay is firmly supported, cross-progression isn’t. And that means it’ll take a good while to start unlocking things, which means you start at the very beginning. That could take a while to build everything back up. For newcomers, this isn’t a big deal. But for those of you that spent months racking up a great collection on another platform, you might be disappointed. Especially when it comes to purchasing content all over again. Oy.

The Play’s The Thing, Kind Of
Now, when it comes to playing Apex Legends, I highly recommend going with docked mode.
That said, it’s far from perfect.
Panic Button, who have handled some great conversions of games to the Switch in the past (like Doom Eternal), gives their all here. The game is a nice technical work at times, running at 30 frames per second (instead of the usual 60) and delivering a decent performance. However, there are noticeable glitches as you go along, particularly with screen blackouts and missing details. To some, this could throw off the experience, if only because you’re probably used to things being smoother on other platforms. That’s not to say it’s unplayable, as it handles nicely with a Pro Controller. But be prepared for a few hiccups.
As for handheld mode, it’s great, but even more details are missing here. And what’s more, the play style feels really cramped when it comes to the JoyCons. What’s more, the UI can be a bit confusing, as you have to navigate with the Switch’s limited control set-up. It can be learned, and the matches are easy to get into once that’s done, but it just feels like a better solution could’ve been figured out. What that is, I dunno, but just throwing it out there.

Other Limitations
We talked about how the graphics can be a bit of a hindrance when it comes to Apex Legends, though the game still runs suitably otherwise. But there are other hang-ups that could get in the way of your enjoyment.
First off, communication is way more limited here, due to the lack of support with headphone chat. After all, this is a team game and you want to keep in touch with players, right? You’ll have to depend on instinct here, which isn’t the worst thing but could cost you a few matches.
For that matter, playability is limited. Not only is trying to play on a portable with JoyCons a struggle, but, because of the Switch’s architecture, you can’t play with a mouse and keyboard, though other versions support it. It would’ve been nice to have the option here. 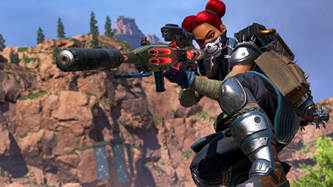 And, finally, as you might guess, while online works pretty good with Apex Legends, it’s not quite the smooth experience it could be. Matches can run slow every once in a while; and then there are those technical glitches that are hard to overlook. Some players might be able to get used to this, but others may turn to a superior console version instead.

Too Many Shortcomings Hamper The Legends
Panic Button is to be commended for getting Apex Legends to run at all on the Switch, especially considering that it’s a much more visceral Battle Royale experience than Fortnite.
That said, it comes up short in too many areas. The visuals are hampered, despite running at a decent frame rate; the control options can be a problem, especially in handheld mode; and the
multiplayer itself, the big draw of the game, can be choppy depending on how well connection rates go. Not to mention the lack of cross-progression – that just feels like a cheap move.
It’s not a bad game to give a try if you’re curious, but be warned – it’s more of an uphill climb than you might expect.

Looking to win a PlayStation 5? We’re giving one away! 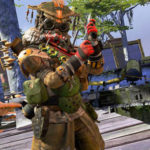