Will Valheim Come To Consoles?

In case you might not have heard by now, Valheim is the next big hit on Steam. Even in its Early Access state, the Viking adventure has already garnered millions of players. And it’s likely to continue its smooth sailing as more join its community, build things and master the game’s intricate combat. 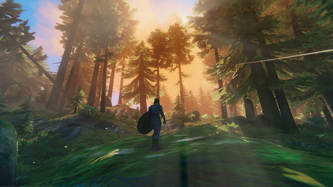 But now there’s an interesting question – could the game ever come to consoles? We’ve seen releases like this come to Nintendo Switch and PlayStation 4 before, along with Xbox One on occasion. And considering Valheim’s sweet outreach, it could just be a matter of time.
Iron Gate, the developers behind the indie hit, haven’t confirmed anything yet, but don’t be surprised if an announcement comes around the corner for it. Here’s why we think it’s bound to happen…

The Developers Are Interested, Somewhat
Over on the official Valheim FAQ, the developers did note that the game is available through Steam over the next year as it continues to work on it. It didn’t confirm that the game would come to consoles…but it also didn’t rule out the possibility.
“There are no plans to release on other platforms as of the time of writing but we won’t rule out console versions in the future,” it noted.
So what does this mean? More than likely, it will iron out all the kinks in the game before it goes full release, and then maybe focus on some sort of console release. Of course, plans could change as its popularity increases. After all, people really like Vikings on consoles, as the previously released Assassin’s Creed Valhalla showed.

There’s Interest In Bringing It To The Switch
Would a game like Valheim work on the Switch? We don’t see why not, as its controls could easily be adapted to the system’s control scheme. And it sounds like some developers may be interested in seeing it happen. 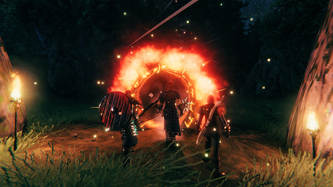 While speaking with NintendoLife about the upcoming port of Apex Legends, Panic Button, a team capable of bringing great experiences to the Switch (including Rocket League and Doom Eternal), expressed interest in bringing the game to the system.
Head of production Dan Hernberg noted that he’s playing Valheim quite a bit, and he would “love to port that to Switch.”
That’s far from official, but it seems like the buzz behind the game is building ferociously. And Iron Gate may be taking note of this, wondering if it could expand its universe following its full release on Steam.
Again, it won’t happen anytime soon – at least, as far as we know. There could always be a surprise announcement, like we saw with Among Us a few months ago. But for the time being, if you want to dive into Valheim, it seems you have to do it on Steam. And considering a lot of folks are, that wouldn’t be the worst thing.