With the runaway success of Super Smash Bros., it shouldn’t be a surprise that some indie developers are trying their own take on the “free-for-all” brawler, in which skillful move sets are simplified in favor of a multiplayer beat-em-up experience. Sometimes it works, and sometimes, well, you end up with something like Brawlout, where the spirit is willing but the result comes up short.
But then you have Mighty Fight Federation, which recently made its debut on PlayStation consoles after a successful run on Steam. While it may not be as truly addictive as Smash, it certainly stands out in the crowd, thanks to strong Crossplay support, a decent array of modes and a cast of characters with original combatants combined with superstars like Yooka-Laylee and Toejam and Earl. And it’s still growing, which means more folks can join the party.

A Good Fight On Their Hands
Instead of being on a 2D plane like Smash, Mighty Fight Federation goes for more of a 3D brawl approach, akin to the Power Stone games from Capcom. The stage design may not be as involved as those games, but there’s still a lot to do in each fighting arena as you pummel multiple opponents in the hopes of winning it all.
Things can be a bit manic in the confined space, but the fights are entertaining, especially as you pull off super techniques. And it comes with some solid, if slightly repetitive, gameplay that makes punches and kicks feel great for each fighter. They all have individual move sets that stand out from one another, though some work better than others. For instance, switching between Toejam and Earl takes a bit of practice. 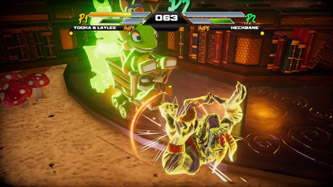 And that’s where the array of modes come in. You can learn quite a bit from the tutorial system, which is helpful; and there’s also Arcade, Versus and Missions to take in, so you can perfect all the combatants you want to learn. Once you’re ready, you can also hop into Online Play, which supports Crossplay. Matches can take a little bit to start, but once they do, they run pretty well.
Overall, the game is more entertaining with friends, either locally or online. That’s not to say there’s no fun in the solo campaign, because it’s great practice. But a game like this thrives on real competition and not AI that just falls for most of the same ol’ tricks. Get your friends for this one.

A Decent Looking Fighter
Since this is an indie effort and not something produced by, say, Nintendo, Mighty Fight Federation isn’t the sharpest brawler on the block. But as I said, it has its charm within its level design and animations.
There’s a decent variety of arenas to choose from here, each with certain conditions and little pieces of aesthetic that make them shine in their own special way. And there’s something excellent about watching Yooka-Laylee mix it up with Toejam and Earl, or one of the original fighters on the roster. There’s actually some good fun to be had here, as some of them seem to lampoon certain tropes in the gaming community. For instance, one character is clearly a comical take on Haggar from Final Fight, and he’s pretty funny – especially going up against the Kunio-Kun buddies. 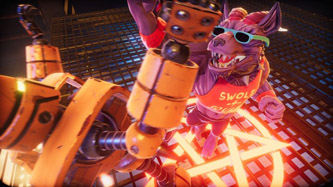 The game does lag in performance slightly when taking on online matches, so be careful of that.
Outside of those, however, Mighty Fight Federation runs pretty good for an indie brawler, and can also be fun to watch while you’re waiting for the next match to start. Again, it’s not world-changing like Smash, but you’re bound to have a good time watching everything unfold if you’re not taking part.

A Good Federation For The Price
One huge advantage that Forthright Entertainment has put into play with Mighty Fight Federation is its price. You get a decent cast of characters and a whole lot of fighting action for around $30, half the price of Smash, and you’re still bound to have a good time with it. it doesn’t quite innovate for the genre like other brawlers, but you’ll have fun with it. And the roster continues to grow, with Miriam from Bloodstained: Ritual of the Night joining later this spring, along with a few others that are likely planned.
So if it’s a beat-em-up you want and you’re more concerned about having a party than learning deep strategies, this Federation just might be your speed. 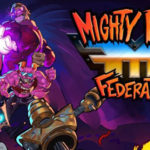