It’s far from game over, man.

Earlier this week, we published a story talking about the announcement of a new game in the Aliens universe. And before you panic about the potential of a sequel to Colonial Marines, we assure you that it’s taking a different route.
In Aliens: Fireteam, you team up with two fellow soldiers as a squad of three, taking on hordes of xenomorphs and trying to stay alive as long as you can. It’s easier said than done, but the developers at Cold Iron Studios are adding in all sorts of components to keep players from instantly being wiped out.
So what can we expect when the game hits PC, PlayStation 4/5 and Xbox One/Xbox Series S/X this summer? Well, plenty, really.

Into The Future
The game actually takes place approximately just over two decades from the original Aliens trilogy, so there’s no sign of Ripley or any familiar (human) faces. Instead, payers will take control of new Colonial Marines characters, fresh from the USS Endeavor. It’s here that they receive a number of distress calls from colonies that are overrun with aliens, and then basically sent in to clean house.
The game spreads out across four different campaigns, in which your newly assembled team must set out and clean house on aliens. You’ll rampage through a number of indoor environments until not one Xenomorph is left standing. 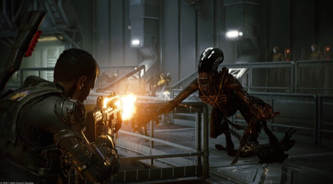 What’s cool is that the game supports both single and multiplayer skirmishes. Feel like taking on the Alien armada with two AI partners? You can do that. Want to get a few friends together and make it a co-op affair? That option is on the table as well.
But you’re not just facing off against the same ol’ aliens. Cold Iron has 20 different types of aliens within the game, including new variations that are being introduced for the first time
here. For example, there’s a Burster that actually explodes like Left 4 Dead’s Boomer, leaving deadly acidic blood everywhere. They change sporadically over the course of the game, adding some new challenges here and there. They also take advantage of the space, so, yes, they’re going to come at you from the walls and ceilings.

Changing Up Your Squad
As you start in Fireteam, you’ll be able to choose from various difficulty levels. If you prefer something lighter, you can do that, and have a few come at you in lesser numbers. But you can also crank up the difficulty, in case you feel like taking on a Ripley-style challenge. 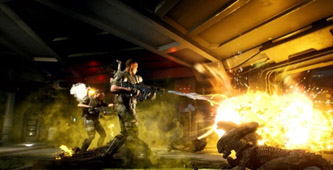 There are five different character classes in all, each with their own style of play and advantages. You can also customize your weapons and mods as you see fit, including those awesome flamethrowers and pulse rifles. And the game will also introduce a new Challenge Card system, which has a new mutation for each mission. This will mix things up as you take on new levels.
The game is loaded with atmospheric action, as you can see from IGN’s lengthy gameplay preview below. It’s fast and ferocious after a slow start, and doesn’t let up until you and your fellow Marines clean house on them. The visuals thus far look impressive, matching the atmospheric design of the films; and, as expected, the aliens sound just like their classic selves.
Maybe use that to your advantage in case you hear them coming at you from above. Because, boy, will they.

A Welcome Return To Aliens
While Fireteam works much differently than the last Alien game, Isolation, there’s still something here that’s bound to hook players. It definitely channels the classic 1986 James Cameron film, Aliens, to a great extent, while at the same time utilizing the formula that worked so well with Left 4 Dead, but in third person, and looking and playing sharp at the same time. It’s still a few months from release, but we have a feeling that this game is sure to grow on us. Just, um, mind the Facehuggers.
Want to win a PlayStation 5? We’re giving one away!