It’s funny how a game can shoot to overnight success with little to no hype behind it. A few years ago, a little Battle Royale game called Playerunknown’s Battlegrounds became a practical overnight success, one that’s still growing by leaps and bounds today. And now, a new contender is taking over the video game world – at least, on the PC front.
That game is Valheim, a survival adventure that takes place in “a procedurally generated purgatory inspired by Viking culture.” In it, up to ten players can take part in an adventure, fighting their way through troll caves and building a new empire in which to call their own. No, literally – the building engine here is so impressive, you might just be saying, “ARK who?”
Valheim has become a massive hit, selling over two million copies in its first 13 days alone. And that success is growing, even without the benefit of an army of streamers hyping up the game at every turn. So what is it about Valheim that makes it so addicting? A number of things, actually.

The Endgame Is Ridiculously Packed
First off, when you jump into a game, it’s important to have goals in mind. Because, otherwise, you don’t really build towards anything and you can grow tired of the game quickly. Well, Valheim has those bases covered like an all-star baseball team. 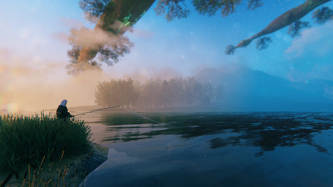 Of course, things start off light, as you simply begin to put together your tools and harvesting goods to help create a place to call your own.
But then it becomes an addiction, as you strive for better weapons and armor. And then you’re given tasks to help clear out the land, including taking on bosses that are more ferocious than you give them credit for.
Not to mention the fact you can do it alongside other players.
There’s just so much to do in Valheim that there’s still so much to do after you’ve played for 40 or 50 hours. That’s when you know you have a good game on your hands – when you spend so much time within its world and never really get tired of it.

Impeccable Game Design
While Valheim may not be the cleanest game out there – particularly when it comes to its combat – there’s still something special in its aesthetic. Iron Gate didn’t need to “go for the gold” with its design, but it works on the general basics when it comes to introducing the game world and its characters.
There’s something simplistic about its building design, as you actually have a good idea of what you’re putting together, compared to simply doing something from scratch – like, say, you would with Minecraft. 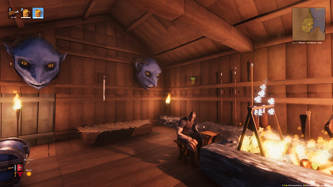 Iron Gate’s building system is not only effective, but quite fun.
Combined with the combat that lets you mow down trolls and other enemies like a bandit (save for those bosses), it makes each turn around the game feel great. And sailing’s not too bad either, though I’m still a sucker for blasting ships out of the water in Black Flag.
And the game doesn’t demand you go in a certain direction. Sure, there are tasks to complete, but you’re practically able to build however you see fit, and improve your character in the ways you want to. Again, a good point when it comes to making an effective – and addictive – game design.
Valheim is only $19.99 on Steam, so jump in and join the party!