Talk about shutting out the competition.

Slowly but surely, Epic Games is carving out its own niche in the gaming world. It’s already taken over with its billion dollar-grossing Fortnite, but then it acquired Psyonix Studios and its hit Rocket League franchise.
So what’s next? Well, how about Fall Guys?
Today, the company announced that it’s picking up Tonic Games Group, and, as part of the deal, the developers of Mediatonic and the hit game Fall Guys, in which weird blob characters compete against one another in a variety of events. 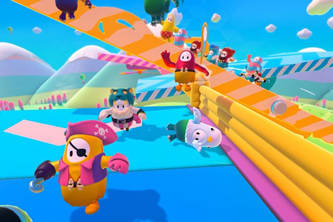 Mediatonic noted in a press statement,
“With our publisher Devolver Digital supporting and championing us along the way with Fall Guys, Foul Play, and Hatoful Boyfriend, we’ve been able to bring some truly unique experiences to players as an independent studio. Joining forces with Epic will accelerate our plans to improve the game and bring Fall Guys to as many players as possible, while continuing to support the community.”
So what does that mean? Well, at this point in time, Fall Guys won’t have any sort of free-to-play option, and will still operate as is on Steam and PlayStation platforms. But it is due to debut on Xbox One and Nintendo Switch this summer; and with its purchase, a stop on the Epic Games Store is very likely. (And no, it won’t be taken off Steam, at least not at the present time.)
“It’s no secret that Epic is invested in building the metaverse and Tonic Games shares this goal,” said CEO and founder Tim Sweeney. “As Epic works to build this virtual future, we need great creative talent who know how to build powerful games, content, and experiences.”
Congrats to Epic and Mediatonic on the pick-up. Now how about a round of Fall Guys to celebrate?