Although Alien: Isolation has done a good job bringing atmospheric terror from the franchise, it’s been quite a while since we’ve had a good run-and-gun experience from the world of Aliens. Colonial Marines was supposed to do it years ago, but didn’t quite get the job done.
However, the developers at Cold Iron Studios might just have something to do the trick. Today, the developer announced Aliens: Fireteam, a new third-person action/adventure stemming from the game’s sci-fi universe. 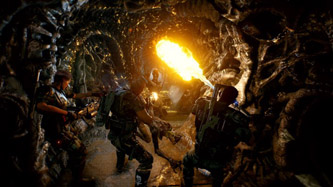 You can either work alone with AI folks, or take on aliens with a squad together in co-op. But you’ll have the odds against you as all kinds of xenomorphs charge at you and try to make mincemeat of you. You’ll need to work together to “survive the hive,” as it were.
Along with its online components, Aliens: Fireteam will also feature RPG elements, as you’ll be able to skill up your soldiers and modify your weapons for greater performance. There are five classes in all – gunner, demolisher, technician, doc and recon, each bringing something special into the game. No matter who you choose, there will be opportunity aplenty to spill some acidic alien blood.
The game will release sometime this summer for PC via Steam, as well as Xbox One, PlayStation 4, Xbox Series S/X and PlayStation 5. Check out the debut trailer below! And remember, in space, no one can hear you scream. Or crap your pants.