Though we’ll still have to wait a month to get our hands on the full game, those of you that have been itching to try out Square Enix’s impressive Outriders can now officially do so, thanks to a just-released demo.
Available for all platforms, the demo walks you through the prologue, as well as the first mission within the game, giving you hours’ worth of gameplay and allowing you to save progress towards the full release.
What’s here is actually surprisingly loaded, though it does take a little time to build up.
Anyway, let’s get started!

Setting The Stage For The Story
The developers at People Can Fly (the team that brought us Bulletstorm and Gears of War Judgment) know how to put together an interesting story. And the one present in Outriders isn’t too shabby, setting the stage for your “altered” character.
The game sends a crew to the planet of Enoch to seek out resources. 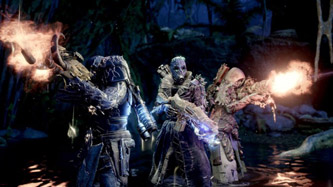 However, unfortunately, they don’t last too long, and it’s up to an interesting storm known as The Anomaly to bring them back with some alterations to their character. This sets the stage for the action to come, though it can take a little bit to get there.
That’s fine, though. The demo introduces you to non-playable characters that you can converse with, and you’d be surprised how much opens up depending who you talk to. This in turn can get you some additional gear, as well as opening up a skill tree for each of your Altered characters.
Speaking of which…let’s talk about our favorites.

Choosing Your Altered Character
There are four characters in Outriders in all, including the tank-like Devastator, the slick Trickster, the support-style Technomancer and the fiery Pyromancer. Each one has special abilities, as well as new ones that you can unlock. As expected, you’ll need to time your attacks carefully, as you can only use them so often before they’re available again.
Each character has something great to offer to the group, but there’s something about the Devastator that I truly appreciate. Built like a tank, they seem to provide the strongest boost to groups in battle. Not to mention some of those cool earth-shaking abilities. The Trickster and Pyromancer aren’t too bad either; and even the Technomancer has their own special tools to lend. Honestly, though, I’d start with the
Devastator, just because he’s so…devastating? Heh. 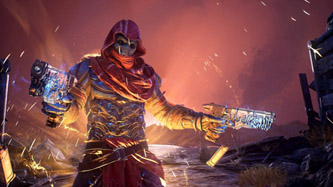 What’s more, the demo supports co-op, for up to three people. You can play solo as well, and I actually recommend starting there first. This will allow you to get through the prologue and then jump right into the first stage, and you can have others drop in and drop out as they please as well. It really gives you an idea of how well things can go either way, and how many more enemies come your way once you get a good group of soldiers. Oh, and of course there’s lots of loot to go around.
Looter shooter for life.
The demo looks surprisingly polished, especially on PS5; and some of the Altered effects are outstanding to watch, particularly when combined with other techniques. The lip sync is a little bit off, but that’s hardly a dealbreaker.

Take An Out-Ride For Yourself
The demo is free of charge, so it doesn’t hurt to give Outriders a go before its release next month. The gameplay is surprisingly in-depth and offers a nice change of pace from other shooters of this type (it’s definitely got some Destiny 2 inspiration, but works on its own beat).
Not to mention it looks terrific and has a lot to offer with each of its central characters, in both single player and co-op. Give it a go and then get ready for the full release on April 1st!