I’ll never get why Capcom ignored their Ghosts ‘n Goblins franchise for so long. At one point, it was a highlight in the company’s catalog, with everything from a fantastic PSP spin-off like Ultimate Ghosts ‘n Goblins to the highly enjoyable Maximo series, which effectively brought our hero into the third dimension.
And then, for years, Arthur was forgotten, in the face of more popular franchises like Monster Hunter and Resident Evil. But, thankfully, Capcom hasn’t forgotten, and now legendary producer Tokuro Fujiwara and his team have returned with one of the best go-arounds yet, Ghosts ‘n Goblins Resurrection. 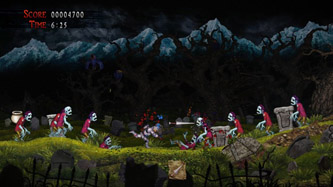 You know the deal story-wise – the princess is kidnapped by angry demons, and it’s up to the brave Arthur, armor and all, to stop them.
Along the way, he’ll pick up an assortment of weapons and try to stay in one piece, something that’s easier said than done.
Let’s dive right into the review and tell you why Resurrection is a welcome return to form for our beloved knight.

Yes, It’s Still Hard, But There Is Mercy
The first thing you’ll notice about Ghosts ‘n Goblins Resurrection is just how well the gameplay works. It feels like vintage GNG through and through, with the ability to shoot weapons in four different direction and use single jumps to get through platforming sections. It also has hidden secrets aplenty, including hidden treasure chests that harbor special items, such as armor replenishing. After all, no one wants to battle demons in their underwear.
Just a word of warning, though. Like past GNG games, Resurrection is definitely hard. Play on the highest difficulty and you’ll be lucky to scrape by the first level with any lives in hand. But fortunately, the game is somewhat merciful with its lighter difficulty settings. You can even play with infinite lives if you feel like that’s the way to go – and the game won’t punish you for it. 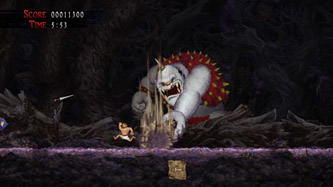 And one other neat aspect to the design is being able to choose which route to take. There are a variety of levels available, eventually leading to the final showdown with the jerk that stole your girl. It’s really cool and shows just how wonderfully open the game really is. That is, if you live to see it all. Those infinite lives just might come in handy…
Finally, don’t forget to pick up the Umbral Bees. These are glowing little bugs that appear for a limited time in the game. They’re worth it, as they can provide some magic upgrades that may make your journey just a hint easier. And you might die snagging one, but you’ll thank us later when you come back more powerful than before. There’s a reason they call it Resurrection.

A Fantastic Presentation
When we first caught a glimpse at Ghosts ‘n Goblins Resurrection a little while back, it looked like a one-off from the previously released Ultimate Ghosts ‘n Goblins on the PSP. Well, parts of that design made the cut, but the team actually pulled off a nice trick with some polished animations and deep level design.
That’s right, not everything is cut and dry here, as you’ll have to maneuver through large, platform-laden levels to get ahead. And that’s while wiping out enemies that could kill you within a few blows. It all looks great on the big screen, and also if you’re playing on the portable front as well. And it runs really smoothly, though things can be a slight bit iffy on the portable front with the screen zoomed all the way out. Part of the challenge, we suppose. 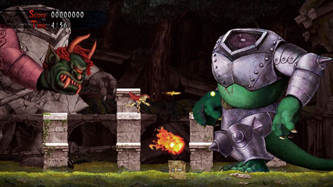 Also, the music is excellent as well, paying homage to the classic GNG soundtracks while presenting a lavish orchestral touch all its own. That, combined with fresh sound effects (particularly from the monsters), really make the audio experience shine.

Prepare For A Challenge, But Enjoy Your Stay
Between Resurrection and the just-released Capcom Arcade Stadium, the publisher really seems to be returning to its old-school ways. Not that it’s forgotten what’s working on the market as well, with Resident Evil Village on the way in a few months. But it just shows that they still have respect for certain franchises out there.
And Ghosts ‘n Goblins Resurrection has been given great respect. It continues to play wondrously and offer a meaty challenge for those willing to accept it, as well as something for casual players to enjoy. On top of that, it looks and sounds great, and has various options for players to take advantage of. Oh, and did we mention the revamped boss fights? They’re lots of fun.
If you’re a fan of the series or just feel like treating yourself to some old-school goodness, Resurrection is just the ticket you’re looking for.
Now let’s see if the company gives Power Stone that level of love. 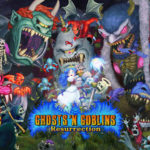