The stage is set, the green flag drops!

This year’s BlizzConline wasn’t exactly the same show that it’s always been, but that didn’t mean it was lacking surprises. In fact, a couple of big ones came up over the course of the show, including Diablo II getting a remastered edition and – surprise! – three classics returning for modern consoles.
Blizzard Arcade Collection celebrates some SNES/Genesis classics of old, with three definitive titles to choose from. Each one is quite different, including puzzle solving/action with The Lost
Vikings; driving with Rock n’ Roll Racing; and platforming/shooting action with the bad-ass Blackthorne.
With its loaded extras and hours’ worth of playing fun, this collection’s sure to be a hit. But the real question is…what game should you play first?

Three Classics To Choose From
For me, the answer, hands down, is Rock n’ Roll Racing. That’s because Blizzard put a hell of a lot of effort into this game. Not only does it include some great visuals amidst an isometric setting, but its gameplay feels a slight bit tighter when it comes to turning and picking up power-ups. Not to mention there are different soundtracks available, between the SNES and Genesis MIDI tunes and the actual rock songs that they’re based upon. Yep, actual licensed songs. And some new ones as well. Not to mention the original announcer re-recorded his crazy lines, along with some additional dialogue. Oh, and did I mention four player split-screen rocks?! 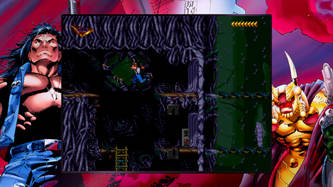 Next comes Blackthorne, which is sort of like Prince of Persia, but with a shotgun. You roam the land, taking on goblin enemies while trying to get out of harm’s way. Fortunately, you’ve got more than enough ammo to go around, though you may want to dodge some incoming shots.
Oh, and save those floating mines for when you really need them. This one’s incredibly fun, and I’m so happy to see it return on modern consoles. And it has a definitive edition with great visuals and sound to boot. Well, 16-bit-wise anyway. We need a contemporary follow-up at some point.
Finally, there’s The Lost Vikings, a terrific puzzle game featuring three hilarious Viking characters who must work together in order to make it through each stage. This one isn’t quite my speed like the other two, but it’s good fun to play, with a variety of levels to clear and some exciting gameplay aspects that will challenge even the best players. Not to mention the graphics look great, even after all these years.

And Some Cool Extras
On top of the three games and the different versions available for each one, Blizzard Arcade Collection also has abundant extras. You can “rewind” at certain points in case you get stuck within a moment and need to rethink it; and a save feature lets you come back at any time. 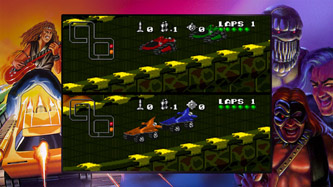 But the real treat? Paying a visit to the archive and checking out the interviews with Blizzard developers. This is a wonderful feature that fills you in on all the great stuff behind these games, and why they’re so special to them. It’s a good history lesson when you’re not busy driving and shooting like mad. Take some time to learn, children.

A Must-Have Collection
We know it’s only February and have the rest of the year to go here, but Blizzard Arcade Collection is already in contention for best retro collection of 2021. Sure, it only has three games, but they’re magnificently done, with different versions and options available. Not to mention the extras that will keep you busy for a while. If you want to turn back the clock with one of the most worthwhile studios out there, this is the way to do it.
Plus, um, I did mention we need a Blackthorne sequel, yes? 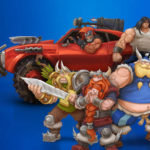