Twisted Metal Is Getting A TV Series

From the writers of Deadpool, no less.

It’s been a while since Sony has hit the battle arena with a new Twisted Metal game, with the last one coming out a few years ago for PlayStation 3. But now it appears that Sweet Tooth and company will invade a new medium – television.
A report from Variety confirms that a Twisted Metal TV adaptation is in the works, under Sony Pictures TV and the PlayStation Productions label. And what’s more, it’s got some familiar producers on board. 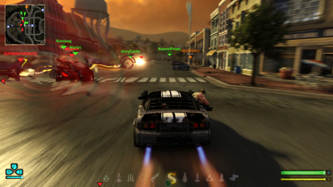 Rhett Reese and Paul Wernick, who previously wrote the Deadpool and Zombieland films, have been tapped to adapt the video game series into a live-action comedy adventure. Michael Jonathan Smith, who worked on the hit Netflix series Cobra Kai, will write the screenplay for the show.
The series will focus on a new character, who ventures into the “post-apocalyptic wasteland” to deliver a special package. Along the way, they befriend a car thief to help them out, and run into a world of trouble along the way – including Sweet Tooth, the psychotic ice cream truck driver whose head is consistently aflame.
But here’s what’s interesting – the voice of Sweet Tooth might be provided by none other than Arrested Development alum and Lego Batman himself, Will Arnett. He’ll serve as an executive producer on the show and may just give the character life. That’s not fully confirmed just yet.
This sounds great and all, but, um, hey, Sony, can we get a new video game to boot as well? It’d be right at home on the PlayStation 5. Just saying. We’ve included footage of the PS3 game below, for those that are feeling nostalgic.

Want to win your own PlayStation 5? We’re giving one away!