While Capcom Arcade Stadium may not be the publisher’s first attempt at making a classic game compilation, it’s easily one of its most in-depth. Once players purchase the three available packs, they have over 30 games to choose from, spanning from Capcom’s mid-80’s days all the way to 2001, with the likes of Giga Wing and the very rare Progear. It may not cover all the essential bases (where the heck are the Dungeons and Dragons games?!), but there’s more than enough here to satisfy die-hard coin-op fans – especially when it comes to the available options.

Three Packs To Choose From, Or All In One Shot
Like Capcom Arcade Cabinet before it, players can choose from three different packs available for Stadium. Each one goes for $14.99 and includes ten various titles, including games like Street Fighter II, Carrier Airwing and more. There’s a lot of variety in each pack, but if you prefer, you can buy all the games for $39.99 and score Ghosts ‘n Goblins as a freebie. Damn straight, the original arcade version. 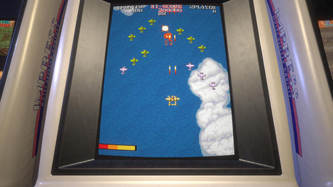 The selection is mostly good, with an array of arcade favorites that players may have forgotten about, like Bionic Commando (different from the NES version, by the way), Final Fight and even Strider. And yes, a few Street Fighter II games also made the cut, though they seem unnecessary since that series already got a compilation release a couple of years back.
It’s a great selection, but I’m a little let down by some forgotten titles, such as Gunsmoke, DarkStalkers and Cadillacs and Dinosaurs. And for that matter, Capcom does have the rights to Alien vs. Predator again, so to not see it here is a bummer.
Regardless, several favorites do return, like the cult classic Cyberbots, which is a terrific brawler in its own right; and, yes, Forgotten Worlds. Been wanting to play that one again for ages.
Each game also comes with different options to tweak, including viewing options for the game, settings that you can adjust, and even speed. You can rewind to make up for crucial mistakes, or even play at up to three times the normal speed, if you’re feeling crazy enough. They’re all very well done, though the rewind/fast-forward options take some getting used to at first. The buttons seem like they’re in reverse.

A Strong Presentation
Capcom really did a bang-up job with making Capcom Arcade Stadium look authentic. When you add the games, you’ll see them available for play in a virtual arcade. Sometimes you’ll have to switch between English and Japanese ROMs, which can be slightly annoying, but they’re all easily accessible and nice to look at. 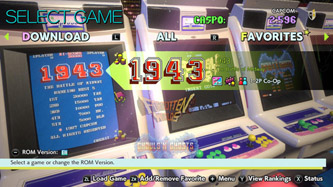 What’s more, the emulation is pretty spot on for the Switch. There are minor glitches, but overall the presentation is smooth; and the sound is a joy to listen to with some of these games. For good measure, you can also play challenges that get thrown your way, comparing your score against others. Keep doing well and you’ll eventually unlock new borders for your games. It would’ve been nice to have a few unlockable titles, or maybe some history clips. But overall, there’s a lot to do here once you connect online. You can also play locally, if you have a friend that wants to rip through Final Fight with you.

Insert Coin And Get This Collection
While I still more loaded collections out there – the recently released Blizzard Arcade Collection comes to mind – Capcom Arcade Stadium is still quite excellent. There’s a load of retro memories here, along with options on how to play and a lot to do against fellow players online.
Plus the emulation is (mostly) flawless, and some of these games really bring back memories. I do hope that Capcom eventually adds DLC options at some point – I’m jonesing for some DarkStalkers again. 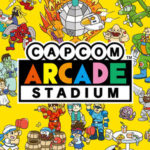