Hold on to your pheromones.

Light gun shooters aren’t really that common anymore. Sure, we have some new Time Crisis and House of the Dead games in arcades, which is kinda nice (with the ones that are open nowadays, anyway). But outside of obscure entries, like the highly enjoyable Assault Chaingun S KM (a neat take on the old Gunblade NY), there really aren’t many to choose from on the home market.
And that is kind of what makes the Gal Gun series so special. It takes the rhythm of old-school light gun games and wraps them around a bizarre concept. Instead of using bullets on enemies, you’re “satisfying” ladies that are coming towards you with special pheromones to excite them.
Relax, it’s not that perverted, but it definitely is weird – and it’s done the team at PQube wonders with two entries thus far. 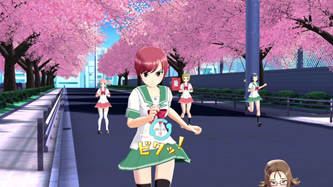 Now we have Gal Gun Returns, and while it’s not a quantum leap forward for the series, it does provide fans with more of this ridiculous love-love action they crave. It’s not for everyone, and if you weren’t on board before, you probably won’t be now. But Returns keeps up the status quo for the fanbase, and that’s sure to be enough for many.

Take Your Pheromone Shots
The game focuses on Tenzou Montesugi, an innocent student who finds himself suddenly tasked with finding the girl of his dreams with a Pheromone Shot provided by a matchmaker named Patako. But that’s easier said than done because, well, all the girls want him.
Your job is to pursue your “target” girl and then begin your run through the school, while taking care of the others with those well-needed shots of satisfaction. Along the way, you may find yourself overwhelmed (a real problem, right?), but that’s where you can activate Doki Doki mode, concentrating “fire” on a particular target and affecting all the other girls on-screen.
Gal Gun Returns’ story is surprisingly bare-bones, as you’ll sometimes find yourself running the same route a few times, albeit with different women. But it keeps its basics generally in check, and those of you that loved the previous games will be right at home here. Not to mention the 400 plus types of panties you can unlock. Yes, that’s a lot of panties.

A Good Looking Effort, But Gameplay Needs Work
Gal Gun Returns is easily the best-looking entry in the series, thanks to fantastic character design and some imaginative fights that come up over the course of the game. Again, it’s dipped in weirdness, and if anime isn’t your thing, you’re likely to get turned off here. But it all runs very smoothly, and if you can endure the silliness of it all, it’s not a bad thing. The music and sound effects are pretty delightful as well, slipping right in with the mood of the game. 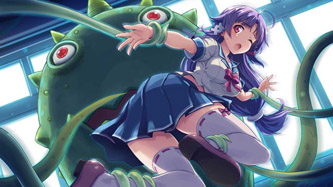 But there’s some work to be done with the controls. Playing with a Pro Controller is the best way to go when it comes to precision. But what’s odd here is that there are no real gyroscopic controls to think of – a bit weird considering the light gun nature of the game. It’s also not really that enjoyable in handheld mode, making it better to play on the big-screen. So keep that in mind if you’re looking for an on-the-go experience involving your women.
The game itself doesn’t take too long to beat, but there is a pretty good Doki Doki Carnival mode to keep you busy, along with additional DLC included with the game. It’s not an overwhelming amount of content, but it’ll keep fans happy.

Stay For The Weird
Again, how you adapt to Gal Gun Returns really depends on what kind of a fan of the series you are. If you couldn’t get enough of Double Peace or Gal Gun 2, this’ll be your speed, despite some changes to make the experience a slight bit smoother. But if it’s hardcore action (no, not that kind, perv) you’re after, maybe stick with Assault Chaingun or another type of shooter instead. These Returns aren’t for everyone, but PQube makes it for a specific audience – and they’ll eat this up like their favorite anime. 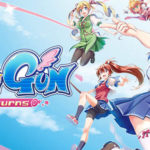