Race ya to the green!

Can you believe it’s been almost seven years since we were graced with a new entry in the Mario Golf franchise? Ever since its debut on the Nintendo 64, it’s become a staple for sports fans on the Nintendo front, thanks to the developers at Camelot understanding just what makes a golf game tick. But, alas, we haven’t seen it since the glory days of the 3DS with World Tour.
But that will all change this June when Mario Golf: Super Rush arrives for Nintendo Switch.
Announced earlier this week during the Nintendo Direct, this latest entry promises to be the most entertaining yet as Mario and friends tackle a new story mode, as well as a multiplayer- oriented mode that will surely be a huge draw, especially as you mow friends over. That’s right, friends – golf has become competitive in the world of Mario!

Prepare For Speed Golf
There hasn’t been a real-time multiplayer component to golf games in several years, with Tiger Woods PGA Tour 14 being the last one to really try. However, in Super Rush, players will take competition to a new level with Speed Golf. 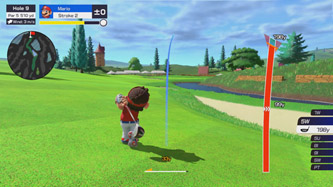 In this mode, the goal is to complete a round of golf in the quickest time possible. But it all unfolds in real time. That means you take a swing of your club, then run to wherever your ball is, and then hit it again after getting the aim just right.
But there’s an interesting catch. You play against other players, and they’re on the same course as you and chasing after their shots as well. And along the way, you can use defensive moves to throw them off a little bit. Special shots can sabotage them; and you can also take advantage of dashes to try and get a speed boost.
It’s a neat idea that’s sure to make the game a big multiplayer hit. And, man, Wario can be even more of a jerk now. As if his taunts while attempting to swing weren’t distracting enough as it is.

An All New Tale To Tell
Along with traditional arcade and speed golf modes, Super Rush will also include a Story mode, built around your custom Mii character. You’ll enter the Mario Golf world as a newcomer, tasked with training and competing with Mushroom Kingdom characters to make your way up the ranks. It looks to have the same rhythm as previous story modes introduced in prior Mario Golf games, but with a new level up system, where your experience points can go a long way into making you a better player.
And what’s more, you can carry over your Mii character into traditional modes, just to see how they’d fare with Mario and company. It’s a cool feature that adds a bit of personality to the game, so it’s not just limited to the usual suspects. (Looking at you, Wario.)

Different Ways To Play
With its introduction on the Switch, Mario Golf: Super Rush will have new ways in which you can play your game. You can use traditional controls with the Pro Controller, or even take the game on the go with the Nintendo Switch handheld mode. 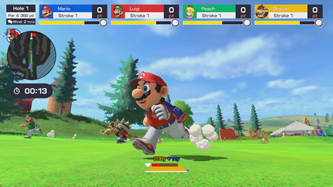 But if you’re a true enthusiast, you want to swing your club, right? Fortunately, the game supports motion controls, as you’ll hold the JoyCon like a golf club, so that every motion is captured. Just don’t slice! There are various options available, so take a look and see what fits for you.

Time To Hit The Links
With its new competitive angle and the usual cast of characters (plus your Mii) aiming to get a good score, Mario Golf: Super Rush looks to be the most entertaining entry yet in the series.
Plus, with local and online multiplayer, there’s no shortage of players to challenge on the course. Especially that one that picks Wario. (You can tell we have a grudge, can’t you?)
Take a drive with Super Rush when it hits the Nintendo Switch on June 25th!