As expected, HBO Max debuted the new trailer for its Mortal Kombat reboot this morning. And it’s bloody brilliant. Mainly because it’s bloody.
Like previous films, the movie focuses on a tournament. However, they aren’t playing this time around, as they’ve reintroduced the element of violence that the games have become known for. 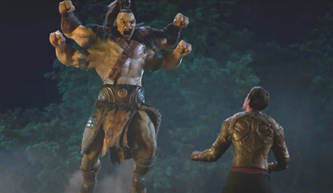 The focus is on Cole Young (Lewis Tan), a newbie fighter who’s been given some kind of birthmark that resembles the Mortal Kombat logo. He finds out that he’s destined to be part of a great tournament alongside other combatants, including Liu Kang (Ludi Tan), Raiden (Tadanobu Asano), Kung Lao (Max Huang), Kano (Josh Lawson) and Sonya Blade (Jessica McNamee). Needless to say, the fate of the world is on the line. Oh, did we mention the freakin’ legendary Hiroyuki Sanada is Scorpion?!
Directed by Simon McQuoid, the film definitely earns its R-rating, based on the trailer below.
There’s a lot of bloodshed, from Jax losing his arms at the cold hands of Sub-Zero to a brief glimpse of the fatalities that are to come. Not to mention a large array of characters – even Kano comes back, and this time he’s not a cheesy animatronic puppet. He’s huge.
You can watch the trailer below and view the film for yourself both in theaters and on HBO Max starting on April 16, 2021. The new era of Kombat can’t get here soon enough!