After debuting New Super Mario Bros. U on the platform a year prior, Nintendo finally justified the Wii U system with Super Mario 3D World in 2013. It expanded upon the universe greatly, introducing challenging new encounters with Bowser while also giving the series its most adorable power-up yet – the cat suit!
But now, like most Wii U games before it, Super Mario 3D World has come to Nintendo Switch.
That said, this is no mere port. Along with the full adventure we remember from years ago, there’s also online play, control tweaks, and, best of all, an entirely new expansion called Bowser’s Fury that introduces the enemy’s best formation yet. We’re talking dark, people. Not emo. DARK.

The Classic Adventure Lives Again
First, let’s get to Super Mario 3D World. We’re happy to report that Nintendo ported this game with flying colors, as it never looked better than it does on the Switch. The graphics are truly delightful, as you can see every inch of the levels you’re exploring, and even track down secrets like a champ. The animations are cute as well, especially when Mario and the gang climb into their cat suits and scamper up walls while making little meowing sounds here and there. And the overview map is a delight, reminding us of the days of old, when Super Mario Bros. 3 was still a thing. 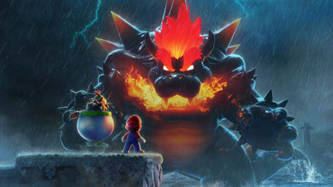 The music is a treat as well, including some fun jazzy melodies throughout and some entertaining boss themes. The sound effects are spot on as well, and, yeah, we already mentioned the meowing. If you’re not a fan of cats, you might have to swallow your pride and enjoy what this game has to offer.
As for gameplay, it feels just as natural as it did on the Wii U. Controls come off like clockwork, no matter which type of controller you’re using. The Pro Controller obviously comes best recommended, but the game also handles really well with the JoyCons in portable mode, even if performance is a slight bit off.
Multiplayer is still excellent with Super Mario 3D World, especially locally. Up to four players can take on levels together, working alongside one another to collect coins, beat enemies and save the day. There’s online play as well, though it can take a little while to get connected. Once you are, though, it’s a nice addition.

And Onto Bowser’s Fury!
What makes Super Mario 3D World stand out from other ports is its new expansion, Bowser’s Fury. This actually feels more like a hybrid between World and Super Mario Odyssey than a straight-up sequel, but it works really well as you and Bowser Jr. – complete with his Super Mario Sunshine paintbrush – team up to take on Dark Bowser and his reign over an imaginative
cat town, Lake Lapcat. 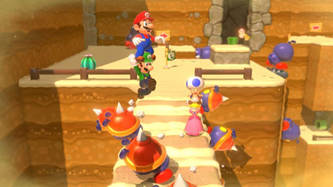 There are challenges galore here, but the general goal is to light up the lighthouses, collect the Cat Shines (yes, they’re adorable as they sound), and activate the Giga Bell. By doing this, Mario increases his size, making him a formidable opponent against Dark Bowser. And you thought Godzilla vs. Kong was an epic match-up.
While a bit on the difficult side at times (mainly due to Dark Bowser’s consistent state of attacks), Bowser’s Fury is awesome. It’s a thrill playing through new levels and finding all sorts of secrets, while also enjoying the lovely visual flair that the game packs. If anything, the only real letdown is that co-op isn’t nearly as engaging as it should be, if only because Bowser Jr. isn’t as fun to play as Mario. This could’ve been a good opportunity to throw his friends into the mix. Still, it beats nothing.

A Package That’s The Cat’s Meow
Some people may think that Super Mario 3D World + Bowser’s Fury is a mere port. But that’s a foolhardy accusation, if only because it really packs tremendous value. You have the full game, which is a classic in its own right, along with online multiplayer and the ability to tackle an entirely new expansion without having to pay extra. And what an expansion it is, with a ton of Cat Shines to collect and an epic battle with Dark Bowser that’s one for the ages. Nintendo has started 2021 the right way for the Switch with Super Mario 3D World + Bowser’s Fury, and no fan of the franchise should be without it. Even if that means having to scratch out some cash from your wallet.