It pays to be a cat.

by Classic Steve
in Cheats

Super Mario 3D World is now available for the Nintendo Switch, bringing every bit of goodness from the Wii U version with several enhancements. But perhaps the biggest one of all is Bowser’s Fury, a challenging expansion that has you facing the most demonic version of your adversary to date.
You’re going to need all the help you can get to survive. Hopefully, we have a few tips that will keep you ahead of the game in Bowser’s Fury. Just don’t say we didn’t try to help!

The Cat Suit Is The Best
While there are various power-ups that Mario (or whatever character) can use to his advantage throughout Bowser’s Fury, there’s one that’s really good overall – the cat costume.
You’ll first be introduced to this early on in Bowser’s Fury, with a little “meow”-ing going on and obvious cosmetic differences to let you know you’re in the suit. The reason it’s the all-around best costume is the moves that you have in it.
Along with being able to bop on enemies, you can also “scratch” them with swipe attacks, which is very helpful when they come charging at you. They’re also very effective with bosses, as you can easily land an extra hit and give yourself a little more breathing room to plan your next attack. 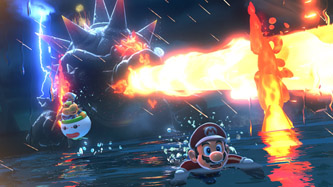 But best of all, you can climb up walls. While it’s great to make your way up platforms like clockwork, climbing up walls allows you to see certain things you might have missed, including hidden 1-ups and possible green stars and Cat Shines. It never hurts to do a little exploring in this suit, as it can pay off. You could say it’s the cat’s meow?

Finding Extra Cat Shines
There are a lot of Cat Shines that can be found throughout Bowser’s Fury, though it’ll take a little while to get to 100 percent. However, here are some tips that will help you score a few extras, which you can add to your collection.
First off, make sure you light all the Lighthouses. Once lit, they can help you locate any Cat Shines that you might have missed. Also, if you think you’ve cleared an area of its Cat Shine, be sure to circle back around. There could be a new one hidden in the world, and it pays to track it down.
Secondly, when dark Bowser goes on the attack, he’ll throw a bunch of Fury Blocks your way.
However, you shouldn’t just pass these by. Once Bowser starts unleashing fireball attacks, these can actually be used to destroy the Blocks. And guess what you might find once they’re destroyed. Yep, Cat Shines. Avoid the incoming attacks, collect the Shines and then watch Bowser make a hasty exit!

Keep Extra Power-Ups At Bay
While the cat suit is the best way to go in Bowser’s Fury, it never hurts to have extras. As you pound blocks and take out enemies, you’ll locate additional power-ups, which you can switch with a simple press of the D-pad. But make sure you keep some handy. You never know when you’re going to get hit, or when you’ll come across a boss battle that will require a little extra firepower. For good measure, the fire flower and cloud boomerang can also provide extra distance that the cat suit cannot, ideal for taking out hazardous foes.
That should help you get a little further in Bowser’s Fury. The rest is up to you! It’s available now for Nintendo Switch, as part of Super Mario 3D World.