A next-level tool for streamers.

Streamers these days are looking to put on more of a show as they get in front of the camera – so, in that regard, an ordinary microphone might not do. They need something that showcases a little bit of their personality while, at the same time, performing admirably under pressure, even during the most hectic of games. And this, folks, is where HyperX’s QuadCast S comes in.
A high-quality microphone that has a price to match – around $159.99 retail – the QuadCast S is an impressive piece of tech. But where it amazes its most is with its lighting, which can be personally modified to match whatever gaming experience you’re into. And that could do the trick for all you up-and-comers ready to build your future on YouTube or Twitch, or whatever streaming service you use.

A Good Design, With One Slight Flaw
In general, the QuadCast S has a great design to it. It’s an 8-inch based cylinder measuring around 2 inches or so, utilizing rubber caps so that it can survive falls, though you probably should be careful with it. The microphone itself actually has some great metal built into it, so it’s durable and stylish at the same time. It also has a solid base that comes with it, though we felt that maybe it should’ve been metal too, instead of the plastic it has at the moment. That’s something HyperX will likely improve over time, but it’s not the worst thing here.

But what makes the QuadCast S stand out over other microphones is its RGB lighting. Here, users can watch as it glows with a number of colors, which you can change up however you see fit with the help of configurations.
Not only do you have a dial that allows you to change between audio settings, but you can also use the HyperX set-up to change the colors of the microphone however you see fit. Playing a horror game? Green might fit the bill. Feeling romantic with a Japanese manga dating game?
Hey, it’s Valentine’s Day, so you can set up bright red and show the love to your fellow players.
The settings are incredibly easy to use, and the QuadCast can also be helpful with its USB-C charging port, as well as the ability to plug in a headset through the jack. HyperX nicely covered all the bases here when it comes to use. But how’s it perform?

Quality Abound
Surprisingly enough, the QuadCast S comes with different 14mm condensors, so you can change up the microphone patterns depending on what you’re looking for performance-wise.
However, if you don’t want to be too technical, the general settings seem to work best. 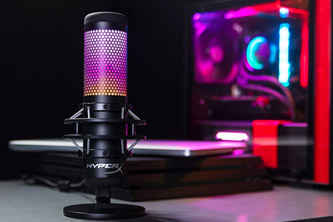 We tested out quite a few recordings and streams with the mic and found little to no problems when it came to clarity. The mic was able to pick up voice and sound effects clearly and easily, even from a slight distance (like a foot or so, with minimal noise). It also cuts out a good deal of the static, making everything sound crystal clear. You can also adjust sensitivity as you go, with the help of the adjustment knobs on the mic itself. It really depends on just how you want to sound.
For a mic that was built mainly for showmanship, the QuadCast S has a great level of performance. Streamers are sure to love this, though some may balk at the right price. Hey, you get what you pay for here, so don’t sweat that.

Speak Up, It’ll Hear You
Overall, the HyperX QuadCast S is a pleasant surprise when it comes to microphones. Its quality is unbeatable when it comes to its lighting, looking like something that would fit nicely with our computer display. It also performs admirably, capturing audio like a champ. Aside from some slight plastic, there’s also hardly any trouble when it comes to its build.
If you’re not too worried about speaking up during a podcast or streaming session, you probably won’t need to be concerned with the QuadCast S. However, if those are your things – or you just want a mic that looks as great as it performs, this is the peripheral for you. 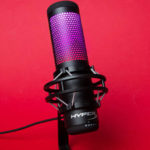