Capcom has a nice one-two punch coming to Nintendo Switch over the next month between the revived Ghosts ‘n Goblins Resurrection and Capcom Arcade Stadium. But while the first game may be instantly recognizable with old-school fans, they shouldn’t pass up on what the second game has to offer.
The publisher is no stranger to offering re-releases of its older hits, having unleashed Capcom Arcade Cabinet for Xbox 360 and PlayStation 3 a little while back, alone with its Capcom Generations games for Sega Saturn in Japan and, most recently, a fun beat-em-up collection for current-gen consoles, including favorites like Knights of the Round and King of Dragons.
But with Capcom Arcade Stadium, it looks to delve a little deeper into its arcade lore, offering 32 arcade hits in all for players to enjoy – and without the need for quarters. This arcade’s open all night, too.

Something For Everyone
The full line-up of games are available on the official Capcom Arcade Stadium page, but you’ll find that there’s something here for everyone. Shooter fans can indulge in 1942 and 1943 to start; platforming fans can take on the original arcade Bionic Commando as well as Mega Twins; fighting fans have Street Fighter and the overlooked Cyberbots at their disposal; and there’s other quirky favorites here as well, like Higemaru, Forgotten Worlds and Carrier Airwing. 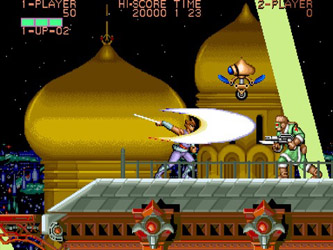 Fans can pick and choose what they wish to purchase, as the games will be offered in packs.
The core release of Capcom Arcade Stadium is free, with 1943 included for good gesture. But from there, any games that players add with purchases will be featured in a virtual arcade.
Here, they can play around with various viewing options, as well as different gameplay settings.
This includes how they view the game (even as a classic game monitor, like you would in the arcades) and also adjust the difficulty however you see fit.
And like most of Capcom’s recent offerings, there’s also a rewind feature. This is ideal when it comes to taking away a crucial mistake – a must for mega-difficult games like Ghouls ‘n Ghosts.
You can rewind and forget it ever happened as you continue to cruise towards a high score.
The games will be available in ten-title packs, with Ghosts ‘n Goblins offered for free with the purchase of all three. Pricing hasn’t been given out just yet, but they’re likely to be around $10-$20 apiece, going for around $1-$2 a title. That’s not bad considering all the options they come with.

Modes And Manuals
Along with the traditional high scoring contests that come with single play, Capcom Arcade Stadium also features bonus modes, including a Score Challenge leaderboard, in which you take on players with the highest point count; as well as Time Challenge, in which you try to speed your way to victory through any given game. The highest scores and times are then posted to the top of the boards, and it’s up to you to try and make your way to the top. 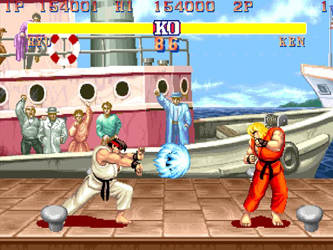 In addition, manuals are also included with each game that you purchase, so you can get tips on how each game plays out – or just gander at the awesomeness of how these manuals appeared when they first came to arcades. Consider it a nostalgic blast from the past, along with building your virtual game room.

Insert Coin!
Capcom Arcade Stadium isn’t too far off from release, as it’s slated to arrive on the Nintendo Switch sometime this month. Hopefully, it’ll have all the old-school goodness we’ve come to expect from Capcom. The trailer shows that the emulation is pretty spot-on, right down to the original arcade sounds. And the bonus modes and features should make each game well worth revisiting – even oddball titles like whatever the heck Tatakai no Banka is.
We’ll let you know how the game fares shortly following release. Let’s go to the arcade!