Arkane Studios has become well known over the years establishing the bold, inventive world of Dishonored through two big games and a fun little side spinoff. But now it’s really looking to take fans for a loop. Or rather, a Deathloop.
You may recall getting a quick look at this new project a little while back during Bethesda’s E3 presentation, focusing on two players going around in a time loop as they attempt to wipe out their intended targets. But there’s more to this story, as you learn something with each go- around, making your next run through the world of Blackreef all the more fascinating. If you live to see it, that is.

Here We Go, Loop De Loop
The main character in the game is Colt. He finds himself on the mysterious island, given the task of taking out eight specific targets within a 24 hour time frame. That sounds mounting enough as it is, but then you need to realize that the rest of the island’s inhabitants have it out for him as well. 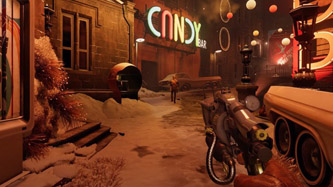 Fortunately, Colt has some neat super powers to help out, including a move similar to Corvo’s Blink technique, as well as access to an array of weapons and the ability to read out certain sections of the map. It’s pretty cool to have all that, though you’ll need to act quickly to outdo the enemies that are after you.
And that includes Julianna. She’s been assigned to take out Colt at all costs, though she has a mysterious agenda all her own that we don’t know about just yet. What’s neat about Deathloop is that a secondary player can jump in at any time, adding a neat multiplayer twist to the proceedings instead of just making it a solo affair like the Dishonored games. That makes the assassin vs. assassin twist kind of cool – and there’s no end to how many go-arounds you have, unless you manage to complete the mission with Colt. That’s a big if.

The Island’s Your Oyster
What’s really awesome about Deathloop thus far is the immersive world of Blackreef. You’ll have all sorts of possibilities here when it comes to getting around and possibly planning your next move. Again, Colt having access to a map is really convenient with this, if only because he’ll need to chart out his most effective course. Likewise, Julianna will likely be hunting him like a hawk chasing after a field mouse, while other dangers also lurk around the eight intended targets – the Visionaries. 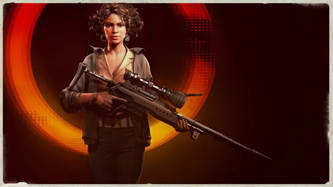 Based on what we’ve seen in the trailer thus far, Blackreef has some fascinating angles to it, and is multi-tiered, so you won’t necessarily just be fighting on the street. For that matter, there’s lots of room to run around, so a straight shot isn’t guaranteed – unless you’re idiotic enough to stand still, of course. Considering the game is made with PlayStation 5 in mind, it’s definitely taking advantage of the hardware.
Which leads us to an interesting snafu. Bethesda made the deal with Sony for timed exclusivity for the title when it drops in May. However, it’s owned by Microsoft now, so you have to wonder if the Xbox Series X will get a special version down the road, or exclusive DLC, or some sort of Crossplay advantage. Whatever the case, Xbox owners likely won’t have to wait too long, as the game will likely come their way later this year. Hey, there’s nothing stopping you from seeking out a PS5 and enjoying that version in the meantime.

Kill Or Be Killed
Deathloop looks to provide an interesting twist on multiplayer and assassination games, taking some neat ideas from Dishonored and applying them to a fun new world to run around in. We can’t wait to give it a go when it comes out around the start of summer for PS5. And then take our turns with it again…and again…and again.

Want to win your very own PS5? We’re giving one away!