Taking Flight In The Pathless

The latest from Giant Squid is quite the journey.

Giant Squid isn’t your typical game developer. Rather than making traditional open-world games where general objectives need to be met, they prefer to experiment and try new things for the player to enjoy. Their last game, Abzu, proved that, taking you on a non-violent underwater journey, where it’s more about the exploration, rather than the end goal.
But now we have The Pathless, the company’s latest release for PlayStation 4 and PlayStation 5.
Its objectives aren’t quite so crystal clear, and there are times when you might wonder, “OK, so what’s next?” But the company’s direction with the game opens up over time, and you soon realize the wonder and bewilderment that comes with it. It may be a short journey – we cleared it in just about six hours’ time or so – but it’s a trip worth taking, especially if you’re looking for non-traditional gaming fare. And really, who isn’t?

A Beautiful Land Run Amuck
The world is a beautiful place in The Pathless, but it’s one where torment is brimming just beneath the surface. A demonic force called the Godslayer is ready to pounce and turn it into its own personal playground. But a young woman named the Hunter isn’t about to let that happen, and vows to undo the Godslayer’s curse, with the help of a loyal eagle and a trusty bow and set of arrows. 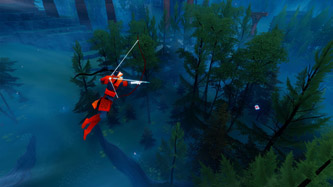 Along the way, the Hunter can gain speedy abilities by shooting red Talismans scattered across the land. By hitting them in chained succession, she can continue to go at a faster pace, making it easier to get around. It’s actually a neat idea that helps you work on your marksmanship, while at the same time providing enough of a boost to get to new areas you wouldn’t be able to access.
The eagle can help at times too, picking up the Hunter and helping her reach new areas. It’s a bit of a trickier ability, without as much payoff as shooting the Talismans, but it also provides some use for this character, so it’s welcome. Utilizing these abilities while solving the puzzles within the world is rather neat, and you feel a sense of accomplishment as you move on to the next thing. It’s really cool.
Just understand that this isn’t your typical open-world experience. There are boss battles, yes.
But the objectives aren’t always clear, and there’s no road map to tell you where to go next.
This is all based around exploration and discovery, but there are some fun little surprises to come across here. Giant Squid makes it clear that sometimes you just have to find the best stuff in their games for themselves – you work at it, but there’s some neat little payoff that awaits.
Glad to see that they continue the trend here with The Pathless.

Gameplay Melds Together With Presentation
While the objectives may not always be laid out for you, The Pathless benefits from a rich gameplay system. You actually feel the pull for each of your shots within the game, thanks to the control scheme put together with the DualSense controller. It feels great, and it helps you to time your shots better so that you can keep up your momentum. The boss battles can be a little tedious, but with a little bit of problem solving skills, you’ll eventually get through them and continue on your merry little way. 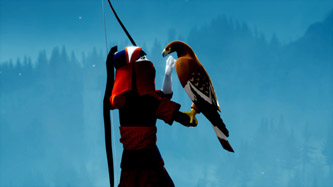 Likewise, the visuals are worth their fair share of applause. While a bit different in scope from the gorgeous Abzu, The Pathless does take advantage of the hardware with its vast open world environments and beautiful animations. It’s a real looker, even if things can be slightly fuzzy at times. Likewise, the audio works on a similar level, with simplicities here and there scattered in just the right way, so that it all comes together as you continue into the land with your flying pal. The music from Austin Wintory is a nice touch too, and well worth the listen.

Not A Flight For Everyone, But Enjoyable For Those Who Take It
Whether you enjoy The Pathless really depends on what you want from an open-world approach. If you prefer to have all your objectives laid out for you, or don’t like frustrations that pop up occasionally with gameplay, this might not be the title for you. Giant Squid does take an interesting approach compared to others, and it might not suit everyone.
However, those that take the trip with this game will be rewarded. There’s some cool stuff to find here, and finally reaching its conclusion has more merit than expected. Plus, it’s really easy on the eyes; and its gameplay is quite engaging considering the simple way it’s set up. That’s Giant Squid for you, sneaking up on you with some form of concept and then presenting a much deeper game than expected. Be sure to book this flight if you’re in for a new PlayStation 5
experience.

Want to win a PlayStation 5 to play The Pathless on? We’re giving one away! 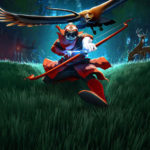