Talk about a death loop.

Sony’s line-up for PlayStation 5 this year already looks stellar, between Gran Turismo, a new Ratchet and Clank game and, of course, the long-awaited follow-up to Horizon Zero Dawn. But there’s another sleeper hit that should steadily be on your radar, as it’s a sci-fi game unlike most of the stuff out there – Returnal.
Developed by the team at Housemarque (the creators of arcade shooter fare like Super Stardust, Resogun and Nex Machina), Returnal brings their dev skills to the next level. This isn’t just another shmup, but instead a sci-fi game with a purpose, as you try to escape a devastating time loop with roguelike turns at every corner.

Meet Selene
The game focuses on a female explorer by the name of Selene, who finds herself on an alien planet by the name of Atropos following a crash of her vessel. It’s here that she learns more about their civilization – and more importantly, their power.
See, Selene is trying to get off the planet any way she can, but she inevitably faces danger that can finish her at any turn. But death is not the end, as she’s managed to be revived and come back, with the planet changing almost entirely as she returns. It’s as if the aliens know what they’re doing with their experimentation, and just want to see what Selene is capable of. 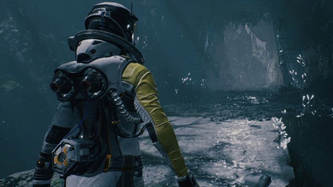 There are other twists and turns as well, hinted at in the game’s trailer below. However, Sony’s keeping very close tabs not to give anything major away here. The way it unfolds is part of the fun, even if that means making a few mistakes along the way.

A Change In Combat
What’s cool about Returnal is that it has enough familiarity to be a hit with sci-fi shooter fans – like those that adore Mass Effect – but its next-gen technology enables some cool dynamic changes, as well as action that moves a bit faster than before.
The game is already set to take advantage of the PlayStation 5 control setup, including haptic feedback that will have you feeling danger at every turn. That will also introduce some neat gameplay ideas, including some cool Atropos gear that you can pick up along the way.
And then there’s the Cthonos, which actually gives Selene a separate item at the start of each of her runs. You can adapt to these and even improve upon your progress each time you start, adding something even cooler to the game when it comes to replay value. It’s fascinating, to say the least.
It’s a fast-paced affair overall, where you dodge some enemy attacks and still lay into frightful opponents before they kill you and force you to start over again. Though not a hardcore shooter like Housemarque’s previous games, there are definitely elements here that remind you they’re still on the ball when it comes to fare like this.

A Fascinating Looking Title
For Returnal, Housemarque has really gone out with the game’s development. The 3D engine looks impressive, a nice change-up from its previous work on the battle royale game Stormdivers. Its universe also appears to be fantastically designed – and, for that matter, loaded with alien enemies that have a knack for glowing like crazy.
Thus far, the game’s design looks compelling enough to work. But we’ve only seen bits and pieces, and something tells us that the finished game will have something spectacular to offer.
Not to mention some solid voice acting and atmospheric sound effects. Bring it on!
The game was originally set to debut next month. However, Housemarque needs just a little bit more time to polish things up, so it’ll arrival on April 30 th instead. That’s fine by us, considering we’ll be, ahem, returning quite often. Ehhhhh?

Want to win a PlayStation 5 to play Returnal on? We’re giving one away!