Skinit Brightens Up Your Console

We take a look at these neat alternate skins.

When you buy a console, you really don’t have much choice in the way it looks – unless you pick up some special edition themed after a particular game, like the Gears of War 4 Xbox One. But if you need to give your system a different, more personal kind of look, there’s an interesting option you can consider – Skinit.

Established for some time in our industry, Skinit has become known as a quality distributor of skins for a variety of devices. Their ease of peeling and applying to systems is fairly easy; and they’re sticky enough that you can remove them and re-apply them elsewhere, should you upgrade your tech or just want to lay things out a certain way.
Skinit recently provided us the opportunity to try out some skins for Xbox Series X and PlayStation 5, in an attempt to give the routine black and white console designs a bump up. And based on our choices, they paid off pretty nicely.

PlayStation 5
For the PlayStation 5, we opted to try out the Aqua Blue Chameleon skin pack, which includes a bright, light blue color for both console and controller alike. When we got the skins, we were surprised by how laid out the plans were, so we couldn’t screw up the application.
The skins applied fairly easy. We do admit that, at first apply, we did run into a couple of wrinkles. However, with a quick peel-off and re-apply, we were able to get them smoothly on the system with ease.
As for the controller, the skins were about the same. There was more possibility of wrinkles, particularly on the ends towards the triggers. But after a couple of attempts, we had a cool- looking aqua blue controller to play along with.
You can order your own here.

Xbox Series X
For the Xbox Series X, we decided to try something a little different in the company’s Carbon Fiber offerings. And since I’m from Denver – and a Broncos fan to boot – I opted for the orange carbon fiber design. And it’s actually really cool, even if the orange slightly clashes with the black colors on the controller.
Again, the skins are fairly simple to apply, but with the carbon fiber, we saw less of the wrinkling that we saw with the chameleon skin. It worked really well, even though there wasn’t a cut hole for the eject button. No matter, we simply made our own. The rest fit over all sides of the system (save for the top vent) without any problems.
The controller skin is great too, easily going over the analog sticks, D-pad and buttons without missing a beat. Again, your color choice may vary, but it still looks rather cool.
You can order your own here.

And There’s More Where That Came From
Skinit doesn’t just go with the general color designs. It actually has a number of licensed skins featuring popular Marvel, DC and sports properties, should you really want to show your fandom. This includes a really cool retro X-Men Xbox One controller decal, which we kind of want to try out on our other peripherals. You can shop around on the official site and see what tickles your fancy. 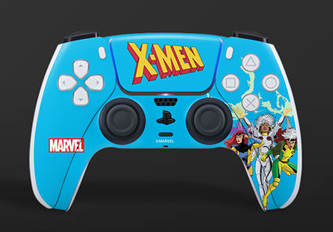 The skins are also reasonably priced, going for generally around $25 or so depending on which models you get them for. Again, they’re easy to use; and their customer service is excellent should you run into certain problems. So don’t hesitate to give your peripherals a new design – even one of your own, with custom products available upon request.
Want to win a PlayStation 5 to apply a new skin to? Here’s your chance!
(Thanks to the team at Skinit for providing samples for us to try out!)